Home
Sports
After defeat against MI, Dhoni handed over his jersey to the Pandya brothers

After defeat against MI, Dhoni handed over his jersey to the Pandya brothers 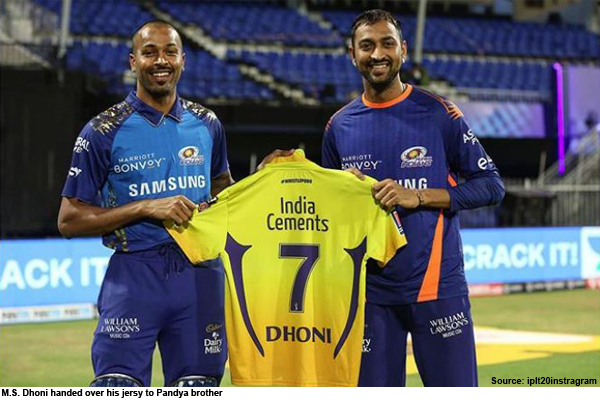 New Delhi: Indian cricketers have always liked MS Dhoni. Ever since the former Indian captain retired from international cricket, active cricketers have regretted not giving the Farewell game to their beloved senior cricketer, who has been a patron to many in this game of cricket.

After his 200th IPL match during CSK’s clash with Rajasthan Royals (RR), Dhoni handed over his jersey to Jose Butler. The 39-year-old cricketer did the same when Yellow Army lost to arch-rivals Mumbai Indians in Match 41 of the ongoing IPL 2020 edition in Sharjah on Friday, 23 October.

This time, he chose the Pandya brothers of MI, Hardik and Krunal. The official Twitter handle of the IPL shared a post in which former captain Dhoni handed over his number 7 yellow jersey to both all-rounders brothers.

MI topped the points table by trailing CSK by ten wickets. Hardik also shared these photos on his official Twitter handle, sharing his love and admiration for Dhoni.

In the 41st match, MI opted to bowl first in Sharjah. Since Rohit Sharma not playing this game due to injury, Kieron Pollard took over. His leading fast bowlers Jasprit Bumrah and Trent Boult took 3-3 wickets of CSK. At one time, Chennai had lost 7 wickets for just 43 runs, but Sam Koran again proved that he is a great all-rounder. He hit the three-time champion team with a half century and brought the team score to 115. Chasing a smaller target, Ishan Kishan’s 68 and Quinton de Kock’s 46 gave Mumbai an easy win by 10 wickets.

After the match, Dhoni said, “Well it hurts.” You need to see what’s wrong, this year is not our year. In only one or two games this year we have batted well and bowled. Whether you lose by 10 wickets or 8 wickets, it hardly matters. All the players are suffering, but they are trying their best. It does not always go your way. Hopefully in the next 3 matches we will perform our best. “