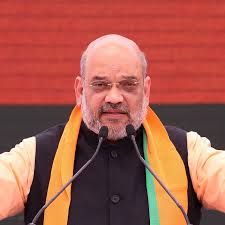 New Delhi: Amidst the ‘Bharat Bandh’ and intensified farmer movement, Home Minister Amit Shah has called the farmers leaders for a meeting at 7 pm. This is very important information because they have called this meeting suddenly, that too when the government is already going to meet the farmers’ organizations on 9 December i.e. on Wednesday.

On Tuesday morning, the proposal sent by Amit Shah came amidst the Bharat Bandh, when the farmers stopped traffic, shops, many services, etc., amid the call for the bandh.

It is known that the farmer leader will meet Union Home Minister Amit Shah at 7 pm today. It is believed that this will be an informal meeting. In the morning, a proposal was sent to farmers towards Amit Shah. Under this, a total of 13 members will meet the Home Minister.

Let us know that many rounds of talks that took place before this have been unsuccessful. The last meeting on Saturday lasted for seven hours, but still no solution was found. The government has called a meeting again on 9 December. However, the farmers have made it clear that they are not allowed anything less than the withdrawal of this law brought in September. They fear that their income will be reduced by this law, while they will become disenchanted with corporate companies.

Agriculture Minister Narendra Singh Tomar, who was leading the negotiations with the farmers, said after the failure of the talks that the government had ‘no sense of arrogance’ but he had also made it clear that he would not withdraw these laws. The farmers gave a presentation of 39 points to the government regarding the flaws in these laws.

Gurdas Maan shared photos with farmers on Twitter, said – farmer is alive, you will always be alive