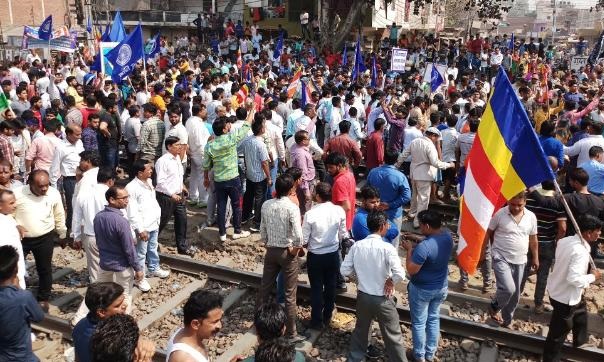 New Delhi: Farmers unions have been protesting at the Delhi border for the last 12 days against the new agricultural laws. After several rounds of negotiations between the farmers union and the government, the farmers have declared ‘Bharat Bandh’ today. The bandh is backed by at least 15 opposition parties. Another round of talks is expected on 9 December between the government and the farmer union.

On the other hand, the Aam Aadmi Party (AAP) has claimed by tweeting that Delhi Police has put them under house arrest after CM Arvind Kejriwal went to the Singhu border on Monday. In view of the protest, a large number of security forces are deployed on the Singhu border. Several rounds of discussions have been held between the farmers and the central government, but no result has been achieved so far. Farmer unions have said that they are not satisfied with the amendment in the agricultural laws being proposed by the government.

However, farmer leaders have said that no one should be forced to join the bandh. Almost all opposition parties and many trade unions have decided to support ‘Bharat Bandh’ and farmers. In view of this, the Center has issued an advisory to all states and union territories to tighten security and follow the guidelines regarding corona virus.

The Aam Aadmi Party (AAP) has claimed by tweeting that Delhi Police has arrested them on Monday after CM Arvind Kejriwal went to the Singhu border.

Social activist Anna Hazare sat on a day-long hunger strike to support the agitating farmers on Tuesday. He said that the movement should spread across the country so that the government works for the interests of farmers. He gave a message praising the protest of the farmers on the borders of Delhi and said that there has been no violence in the last 10 days of the movement.