Bharat Bandh : “Peaceful” Farmers says from 11 am to 3 pm : tips to remember 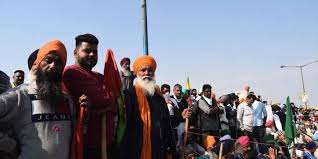 New Delhi: Amid increasing support from unions and opposition parties for yesterday’s call for “Bharat Bandh”, some services in Delhi may be affected – now farmers’ protests – and in the rest of the country. Farmers have called for a “peaceful” nationwide bandh on 8 December, a day before the sixth round of talks with the government to repeal controversial agricultural laws. Indian Farmers Union spokesman Rakesh Tikait said, “The protest is to show that we do not support certain government policies.” The peasants reiterated that they would not give space to any political party and said that their opposition was “peaceful and will continue in the same way”. However, the Center has issued a nationwide advisory suggesting “tight security” for “peace” and ensuring that the Kovid-19 guidelines are followed.

The bandh is likely to be best viewed in Punjab, which has extended its full support. Opposition parties in support of farmers are likely to be in Delhi, Karnataka, Maharashtra, West Bengal, Telangana and the north-eastern states of Tripura and Assam, among others. This is likely to create traffic congestion, and states are scheduled to issue travel advisories. Gujarat has said that it will take action against those who “try to forcefully close shops and other establishments”.

The peasants urged the people to extend their support in a non-violent manner and said that their opposition was not to “create problems for the common man”. “Tomorrow’s India bandh is from 11 am to 3 pm. This is a symbolic protest. We will start at 11 am. All people can reach the office on time … Ambulance, even services like weddings can run. Are. People can perform their own. Card and holiday, “said Rakesh Tikait, spokesperson of the Bharatiya Kisan Union.

Here is a list of all the things you need to know about Bharat Bandh:
The Institute of Chartered Accountants of India has released Paper-1 of the Chartered Accountants Foundation Examination on 13 December, which was to be held tomorrow. Admit cards issued will be valid; Candidates are advised to keep checking the website.

In Delhi, fruits and vegetables may be in short supply. Adil Ahmed Khan, president of Asia’s largest wholesale market in Azadpur mandi, said, “Most of our traders are supporting the Bharat Bandh. Hence, the mandis of Ghazipur, Okhla and Narela will be heavily impacted.”

In Maharashtra, the Vashi Agricultural Produce Market Committee will be closed tomorrow. This is likely to affect the supply of fruits and vegetables in Mumbai, where taxis, taxis and buses will run as usual. Mumbai will be patrolled “so that no untoward incident happens”.

Passengers in Delhi and Tamil Nadu may face problems in the form of some cab and taxi unions, including those associated with app-based aggregators, who have decided to withdraw the bandh. The unions said that those offering auto rickshaws and last mile connectivity will continue to move forward. The government said that arrangements have been made to ensure that people can travel easily during Bharat Bandh.

Many bank unions have called for a black-band protest to show support to farmers, but this is unlikely to affect banking services.

Supply truck movement can be affected in many states as all motor transport associations of India have come out in support of farmers. They will organize peaceful demonstrations and try to hand over the memorandum to the district collectors and commissioners to resolve the issues “generally and as soon as possible to the satisfaction of the farmers”.