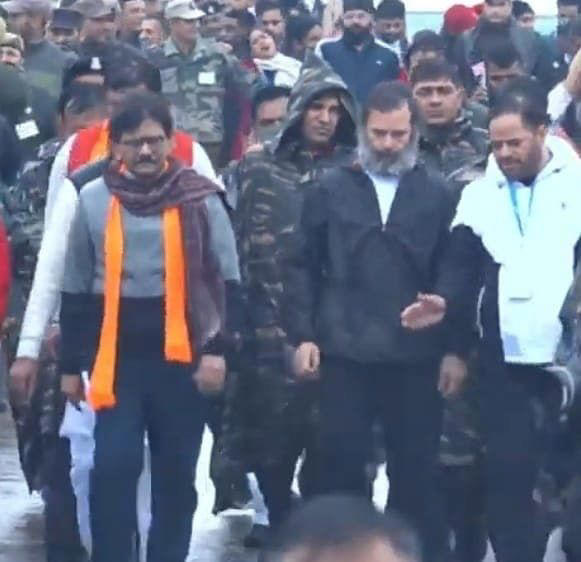 Congress MP Rahul Gandhi, who toured North India wearing only a T-shirt in the bitter cold, was today seen in a jacket for the first time.

Gandhi wore a black raincoat over a white T-shirt. The journey was scheduled to begin at 7 am but was delayed by one hour and fifteen minutes due to bad weather.

The march started from Kanyakumari on September 7, entered Jammu and Kashmir from Punjab on Thursday evening and is scheduled to end in Srinagar on January 30.

Gandhi was accompanied by several Congress leaders, including party’s Jammu and Kashmir unit president Vikar Rasool Wani and his predecessor G A Mir, on the last leg of the Bharat Jodo Yatra.

The march entered Jammu and Kashmir via Lakhanpur on Thursday and halted there for the night after a flag-handing ceremony, which was attended by a galaxy of prominent leaders, including National Conference president Farooq Abdullah.

Elaborate security arrangements were made by the police and CRPF personnel when Gandhi was walking with his supporters despite rains lashing several parts of Jammu and Kashmir since Friday morning.

Several Congress workers and supporters arrived hours before the start of the yatra, which will cover a distance of 25 km before halting at Chadwal in Kathua district for the night. There will be no march on Saturday.