Biden close to magic figure of 270 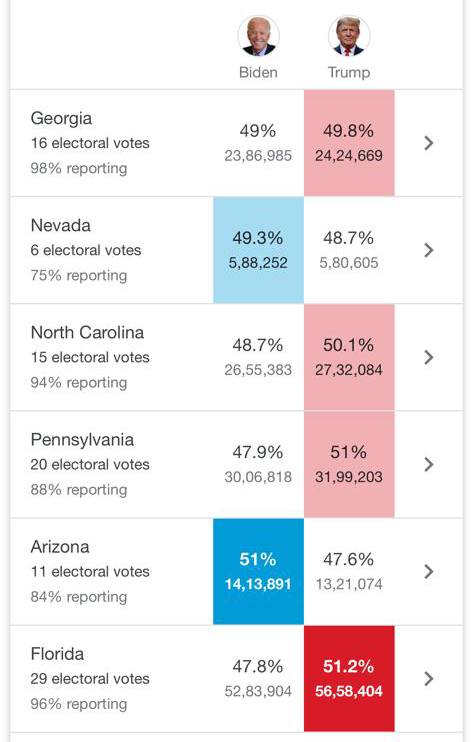 Counting has taken place in many states of America after voting. The counting of votes is in the final stages in many states. This time there is a strong vote. The still ongoing thorn collision between Biden and Trump has become one-sided. Biden is leading by a huge margin. Biden, who is close to victory, has tweeted that his victory will be the victory of America and the American people.

Counting has taken place in many states of America after voting. Based on the results so far, Biden has garnered over 230 votes and Trump has crossed 200. Trump, meanwhile, has accused Democrats of rigging. He has questioned the counting of votes released in Pennsylvania and said he will go to the Supreme Court.

Biden close to majority, counting in 5 states still going on
Biden has 264 electoral votes, while Trump has just 214 votes. Biden is just 6 votes away from the majority figure (270). However, the results of many important states are yet to come. Counting is still going on in some states such as Nevada and Pennsylvania, and the results here will prove decisive for both Biden and Trump.

Biden claims to easily cross majority mark : Joe Biden claims, after a long round of counting, it is clear that we will easily get the majority of the required 270 votes for electoral votes.

‘People vote for record despite epidemic’: Tomorrow once again proved that democracy has been the life of this country for the last 2 centuries. Despite the epidemic, this time more and more Americans voted out of homes and created history: American presidential candidate Joe Biden

Trump charged with disturbances in Wisconsin, will appeal for counting again: Donald Trump not satisfied with Biden’s win in Wisconsin. Trump campaign manager Bill Steppin said, “There have been reports of ballot counting in many areas of Wisconsin, raising questions about the results.” President Trump wants to appeal the counting of votes again.

Reducing distance between Biden and White House: US presidential Democratic candidate Joe Biden has come very close to the White House. With the victories in Wisconsin and Michigan, this gap will be reduced even further.

Trump won after clash in Florida: Donald Trump has finally won in Florida, USA. He has got 51.2 percent votes. However, his rival Joe Biden could only get 47.8 percent of the vote. Even now, there is a fierce battle between the two candidates. According to a CNN report, Joe Biden leads in 224 seats, while Trump has so far received 213 seats.

Meanwhile, the country’s current President and Republican candidate Donald Trump has said while addressing the media that the election results will be surprising. He said, ‘Victory will be what we are expecting. We have wins in Texas, North Carolina and Georgia. We have full faith in Jita. The biggest thing is that we are also winning Pennsylvania. We are slowly moving towards victory. We are going to win in Michigan too. We won as expected. If I say it clearly, we have won the election. Biden knows that he is losing, so preparing to go to court ‘

Trump has accused Joe Biden of rigging the vote count. Trump said, “Now we will go to the Supreme Court for the overnight count.” He has questioned why counting of votes has been going on in Pennsylvania since overnight. I want to thank the American people, millions of people have voted for us.