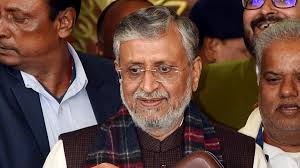 Patna: Former Bihar Deputy Chief Minister Sushil Kumar Modi has been named because the BJP’s candidate for by-election to a Rajya Sabha seat from Bihar.

It will be smooth sailing for Mr Modi’s entry to the Rajya Sabha because the BJP-led National Democratic Alliance (NDA) features a majority within the Bihar legislature .

The election are going to be persisted December 14 – if the rival alliance led by the Rashtriya Janata Dal (RJD) decides to contest.

BJP’s Tarkishore Prasad was made the Bihar Deputy Chief Minister after the party won the state election recently and Nitish Kumar became Chief Minister for the fourth time.

The Chief Minister, who heads the Janata Dal United (JDU), had said he would miss his longtime deputy. The BJP had also denied that Mr Modi was upset over the shake-up.

Mr Nitish Kumar and Mr Modi’s long association transcended the ups and downs of the ties between their parties. Mr Modi often stepped in when cracks surfaced within the NDA in Bihar and was foremost in defending Mr Kumar when he faced attacks from Lok Janshakti Party’s (LJP) Chirag Paswan or maybe from BJP leaders.

The Rajya Seat to which Mr Modi is looking to be elected fell vacant after the death of Lok Janshakti Party founder and Union Minister Ram Vilas Paswan.

The LJP fought the Bihar election against the JDU, but not against the BJP.
When it had been announced that Mr Modi would not be the Deputy Chief Minister, sources had said he would tend a central assignment.

The NDA managed to return to power in Bihar within the recently held election to the 243-member assembly by winning 125 seats.

Lalu Yadav’s son Tejashwi Yadav of the RJD put up a robust fight. His party emerged because the largest party, though the opposition alliance fell in need of the bulk mark.