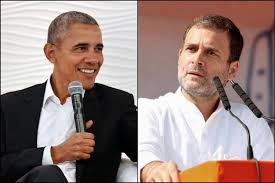 NEW DELHI: After Rahul Gandhi was referred to as a ‘nervous’ leader by former US President Barack Obama in his book, the Congress chose not to comment on it officially, though party leaders on Friday criticized Obama.

Congress Chief Spokesperson Randeep Surjewala said, “May I humbly remind certain overzealous friends of the media running a sponsored agenda that we don’t comment on the individual’s views in a book.” In the past, a leader has been called “psychopath” and “master divider” by people and agencies. We didn’t acknowledge such comments. he added.

Though Congress leaders have objected to it. “Mr Obama, no one can know the personality of any person in 5 to 10 minutes. Sometimes it takes years . You are wrong to judge the personality of Rahul Gandhi ji. You will bite the dust just wait for some time,”said Udit Raj, a party

While Acharya Pramod Krishnan has been more critical of Obama, he said, “He has hurt the sentiments of crores of Congress workers who consider Rahul Gandhi as God.” He attacked Obama and said, “Those who speak truth are incompetent and those who speak lies are competent “and how did Obama knew that he is a bad student, was he with him in the class. Krishnan termed Obama an “andh bhakt”.

Rahul Gandhi had met Obama on many occasions, the first one was in November 2010 when Rahul Gandhi was the General Secretary of the party. And second was when Obama visited India in 2017 said sources.