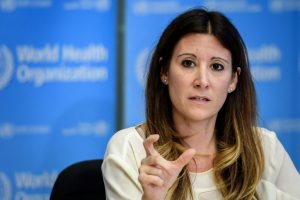 The omicron coronavirus variant has now been detected in two dozen countries and the World Health Organization says that although much remains to be learned about the new strain, there is no indication that current COVID-19 vaccines are killing people. Will not continue to save.

The WHO said the new strain had been detected in 23 countries, but later Wednesday the United States reported its first case of the omicron variant.

Speaking at a news conference Wednesday in Geneva, Maria Van Kerkhove, the COVID-19 technical lead in WHO’s Health Emergencies Programme, said scientists expect to know more soon about how quickly the new variant spreads and how severe it might be.

While it is “early days,” there’s “some indication that some of the patients are presenting with mild disease,” Van Kerkhove said.

“We expect to have more information on transmission within days, not necessarily weeks, [and] in days in terms of the severity profile,” she said.

Omicron, declared a “variant of concern” by the WHO last week after being identified in South Africa, has quickly become a global cause for concern amid speculation that it could possibly evade vaccines and acquired immunity from infection with previous strains including the now-dominant delta variant.

Van Kerkhove said she wanted reporters attending the news conference to make “crystal clear” that “there’s no indication to suggest that the vaccines won’t work even if there is a reduction in efficacy.”

“It’s still better to have the vaccine because it will save your life,” she said.

She cautioned that what continues to drive infections is “increasing social mixing in the context of the inappropriate use of public health and social measures. Not lockdown, but things like masking, hand hygiene, distancing, improving ventilation, etc.”

Van Kerkhove praised South Africa for its transparency and its willingness “to not only share data, not only share information, but also share samples.” But she said the travel bans on the country “have caused some challenges for those samples to actually be shipped out of the country.”

Meanwhile, South Africa’s National Institute of Communicable Diseases on Wednesday reported a doubling of coronavirus cases to 8,561 in the past 24 hours. However it said that the number of deaths and hospitalizations had not changed significantly.

WHO Director-General Tedros Adhanom Ghebreyesus has called for “tailored” travel restrictions, including testing of travelers before and after they arrive in a country, and advised against blanket bans that “place a heavy burden on lives and livelihoods.”