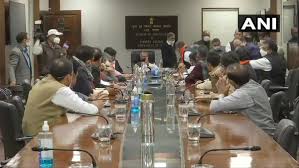 DELHI: Amid an ongoing protest by thousands of farmers on various borders of the national capital against three new central farm laws, a delegation of Hayana MPs and MLAs on Monday met Union Agriculture Minister Narendra Singh Tomar.

After meeting Tomar here, Chautala had said the crop procurement at the government-decided MSP (minimum support price) would be ensured for every farmer till the time he was part of the government .

The meeting follows talks between Haryana Deputy Chief Minister Dushyant Chautala and Tomar on Saturday, after which the state leader had hoped that the talks between the Centre and therefore the protesting farmer unions would resume soon to break the deadlock.

Chautala had also met Defence Minister Rajnath Singh and Food, Railways and Commerce Minister Piyush Goyal, before meeting Tomar and had asserted that the Haryana government was stable as of now.

Jannayak Janta Party (JJP) leader has been facing pressure from the opposition and some Haryana farmers to withdraw from the BJP-led government in the state. He had earlier said he will resign if the MSP system is threatened.

Farmer unions, particularly in Punjab and Haryana, say that the new laws will result in the dismantling of the MSP system under which government agencies buy their crop at an assured price. Their protest on various borders of the capital has entered its third week.

In its proposal to farmers on Wednesday last week, the Centre had said it will give a written assurance that the MSP system will remain and also redress their other key concerns. The unions, however, are demanding complete rollback of the central laws and have threatened to accentuate their agitation.