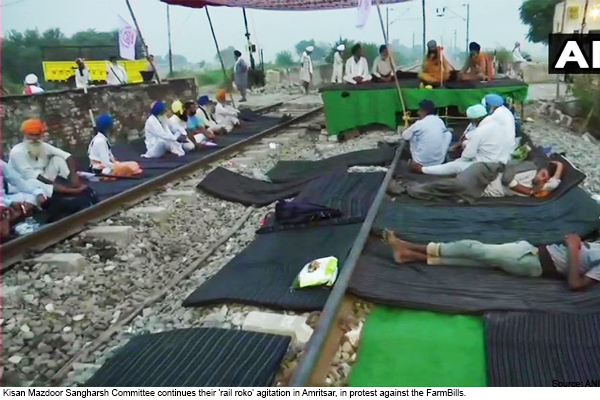 New Delhi: Recently, 3 agricultural bills passed in the Parliament are angry with the farmers across the country. Farmers’ organizations have called for a nationwide agitation against this on Friday. However, the impact of the movement is more visible in Punjab and Haryana. The farmers of Punjab sat on the railway tracks on Thursday. In view of the rail roko movement, the railways partially canceled 20 special trains till Saturday and halted 5 before the destination. On the other hand, farmers and artisans in Haryana have warned of jamming the highway. On the other hand, in UP also SP has called for farmer curfew and jam.

In Punjab, the Kisan Mazdoor Sangharsh Samiti has announced 3-day rail roko movement, which is also supported by other farmer organizations. The peasants took over the rail tracks at Amritsar and Ferozepur. Workers of the Bharatiya Kisan Union (Ekta Ugrahan) blocked rail tracks at Barnala and Sangrur on Thursday morning. 31 farmers’ organizations in Punjab have announced a complete bandh on 25 September. Meanwhile, the Railways said, the economy is improving after the unlock, in such a situation that the transportation of essential commodities and food grains will be severely affected due to the disruption of the rail service.

Markets and mandis in Haryana will remain closed on Friday during the proposed Bharat Bandh on the call of the All India Kisan Sangharsh Coordination Committee. Farmers have warned of jam on major roads and rail tracks.
In UP, SP will protest in all districts. The Congress will lay siege to Vidhan Bhavan on September 28 and conduct a farmer awareness campaign from Friday to October 31.

The Central Government has recently passed three bills related to agricultural reforms from Parliament. These are the Agricultural Produce Trade and Commerce (Promotion and Simplification) Bill-2010, the Farmers (Empowerment and Protection) Price Assurance Agreement Bill-2010 and the Agricultural Services Bill-2020. Farmers fear that the bill passed by Parliament will open the way to abolish the minimum support price and they will have to be at the mercy of big corporates.

Amid fears of bills on farmers, Agriculture Minister Narendra Singh Tomar accused the Congress of misleading the country. He said, Congress had recently advocated the removal of agricultural produce from the provisions of the Essential Commodities Act and the Bill. This Congress politics will weaken the country.

In view of the demonstrations on the rail tracks in Punjab, the Railways has canceled many trains going towards Punjab till 26 September. Many trains are being terminated at Ambala Cantt, Saharanpur and Delhi stations only.

The Ambala-Ludhiana, Chandigarh-Ambala rail route has been closed in view of the peasant movement. Because of this, the railways have canceled about two dozen trains running on the converted route.