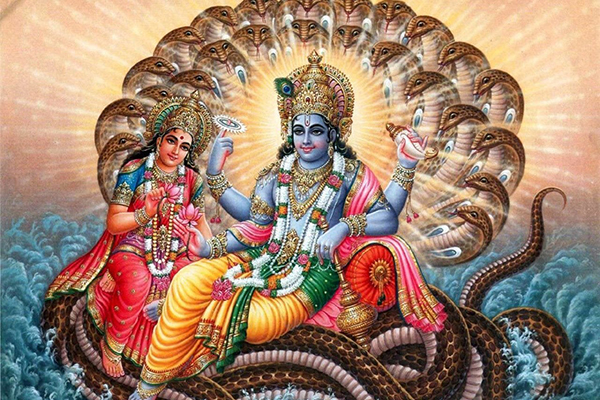 Every year on the Ekadashi date of Shukla Paksha of Kartik month, Shaligram form of Lord Vishnu and Mata Tulsi are married. This day is called Devuthani Ekadashi. Lord Vishnu wakes up from Yoga Nidra after four months on the day of Dev Uthani Ekadashi. According to religious beliefs, Lord Shri Hari first hears the call of Harivallabha i.e. Mata Tulsi after waking up from Yoga Nidra. The auspicious time of marriage also starts with Tulsi Vivah.

Tulsi marriage is performed on the day of Devuthani Ekadashi. Tulsi marriage has special significance in Hinduism. Auspicious or auspicious work starts from this day.

According to religious beliefs, Lord Vishnu has special blessings on those who perform Tulsi marriage with rituals. It is believed that by doing Tulsi marriage, one gets the same virtue as a daughter-in-law. Marriage of Lord Shaligram and Mata Tulsi leads to a happy married life. Women do fasting and worship on this day to get happiness and prosperity.

On the day of Ekadashi fast, get up in Brahma Muhurta and take a bath etc. and take a vow of fasting.
After this worship Lord Vishnu.
Now light a lamp and incense in front of Lord Vishnu. Then offer them fruits, flowers and bhog.
It is believed that Tulsi should be offered to Lord Vishnu on the day of Ekadashi.
In the evening, while worshiping Lord Vishnu, recite Vishnu Sahasranama.
The fasting should take only sattvik food.
Food is not consumed during the fast.
Consumption of rice is prohibited on this day.
After breaking the Ekadashi fast, give donations and dakshina to Brahmins.

Tulsi (plant) was a girl in her previous birth, whose name was Vrinda, she was born in the demon clan, she was a devotee of Lord Vishnu since childhood. She used to worship and serve God with great love. When she grew up, she She was married to the demon king Jalandhar in the Rakshasa clan. Jalandhar was born from the ocean.

Vrinda was a very pious woman, always used to serve her husband.

Once there was a war between the gods and the demons, when Jalandhar started going to war, Vrinda said – Lord, you are going to war, as long as you are in the war, I will sit in worship and perform rituals for your victory, and until you return. Come, I will not give up my resolve. Jalandhar then went to war, and Vrinda sat in worship with a vow of fasting, due to the effect of her fast, even the gods could not win Jalandhar, when all the gods started losing, they went to Vishnu.

When everyone prayed to God, then God started saying that – Vrinda is my supreme devotee, I cannot deceive her.

Then the deity said – God, there is no other way, now only you can help us.

He asked – who are you, whom I touched, then God came in his form but he could not speak anything, Vrinda understood the whole thing, he cursed God, you become of stone, and God immediately turned to stone.

Lord took the form of Jalandhar and reached Vrinda’s palace. As soon as Vrinda saw her husband, she immediately got up from worship and touched his feet, as soon as her resolve was broken, the gods killed Jalandhar in battle. Diya and cut off his head, his head fell in Vrinda’s palace when Vrinda saw that my husband’s head was chopped off, then who is this who is standing in front of me?

All the deities started shouting Lakshmi ji started crying and praying, when Vrinda ji made the god back like that and she became sati by taking her husband’s head. When a plant came out of his ashes, Lord Vishnu said – From today onwards his name is Tulsi, and one form of me will remain in the form of this stone, which will be worshiped along with Tulsi ji in the name of Shaligram and I will accept Bhog without Tulsi ji. I will not Since then everyone started worshiping Tulsi ji. And Tulsi ji is married with Shaligram ji in the month of Kartik. It is celebrated as Tulsi Vivah on the day of Dev-Uthavani Ekadashi.