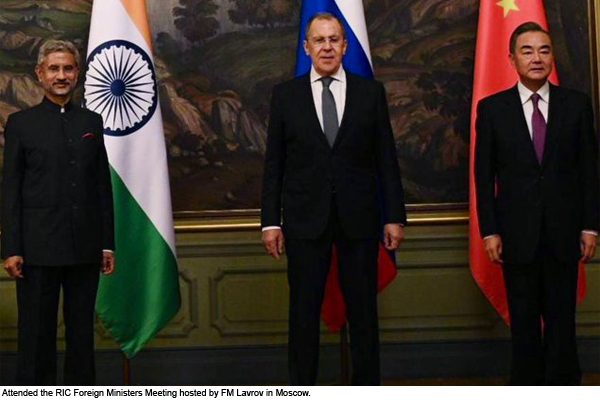 New Delhi: Amid simmering tension at the Line of Actual Control (LAC), Indian Foreign Minister S Jaishankar and his Chinese counterpart Wang Yi met in Moscow on Thursday evening to bring the situation under control.

Soldiers of both the countries are deployed face to face in the Pangog Lake area of ​​Ladakh sector, triggering fears that any major incident may blow up at the border any time. A few days earlier, China had accused the Indian soldiers of crossing the border and firing at them. However, India had contradicted the statement and pinned the blame squarely on China.

According to Zee News, India and China have agreed on five points to reduce the tension along the border. This was agreed upon in the Moscow meeting between Jaishankar and Wang Yi.

A top government source said that in a two-hour-long conversation between the two leaders, a five-point agenda was agreed to reduce the tension on the border.

After the meeting, a joint statement in this regard has also been issued, according to which the forces of the two sides will continue their dialogue and make efforts to reduce tensions at their respective levels.

What 5 things were agreed: –

Consensus to continue the conversation
In a statement issued after the meeting, the two countries will keep in mind all the agreements reached in the past for peace in the border areas. In the Foreign Ministers’ meeting, the two sides have agreed to continue dialogue on border-related matters through the Special Representative Mechanism (SR). The SR-level system, led by India’s National Security Advisor Ajit Doval and Chinese FM, has met twice over the last four months of the deadlock on the Line of Actual Control. It has also been agreed that both sides will speed up the work of building trust for peace in the border areas after the current situation improves.

“Peace on the border, only then we will move forward,” Jaishankar made his stand clear at the meeting. He acknowledged that it takes time to resolve complex issues such as border disputes, but also made it clear that there can be no progress without peace on the border. Jaishankar also said that recent events in eastern Ladakh have soured bilateral relations. The sooner this problem is resolved, the better it will be for both the countries.

In the meeting, India said that the action of Chinese troops on the Line of Actual Control (LAC) is not only a matter of concern but it is also a violation of the agreements between India and China in 1993 and 1996. Jaishankar said that the Chinese military acted in provocation at several places, which is a direct violation of bilateral agreements and protocols.

India has made it clear to China to follow all the previous agreements in the border areas and also said that the Indian Army has always followed the agreements and protocols. After this important meeting between the two countries, it is believed that a decision can be taken soon on the deployment of troops at the military commander level.