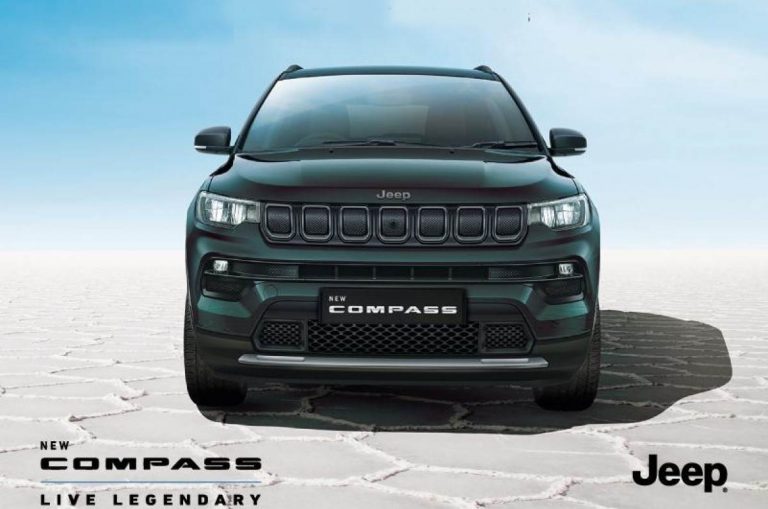 The Jeep Compass facelift will be launched in India on 27 January 2021. The updated SUV, which gets styling tweaks and a completely new interior, was recently unveiled.

The updated compass offers wireless charging and a powered tailgate among other features. The engine options are the same – a 2.0-litre diesel and 1.4-litre petrol., With more features, it also gets a heavily revised interior.

2021 Jeep Compass Facelift: What’s New?
The Compass facelift gets a completely new interior, with a new floating 10.1-inch touchscreen in the center of the dashboard. Below the screen is new, slim AC vents and HVAC controls. The facelift features double-stitched leather inserts on the dashboard, a new three-spoke steering wheel, and a full, 10.25-inch digital instrument cluster.

Changes to the exterior include revised headlights with integrated LED DRLS, an updated seven-slate grille, a tweaked front bumper with a larger air dam, and new fog light housing and alloy wheels.

Compared to the outgoing compass, the facelift has the FCA’s U Connect 5 infotainment system and connected car tech, wireless charging, 360-degree parking camera, dual-tone leather upholstery and a powered tailgate.

2021 Jeep Compass Facelift: Engine and Gearbox
Along with the outgoing model, the Jeep Compass facelift is powered by a 173hp, 2.0-litre diesel engine and a 163hp, 1.4-liter turbo-petrol engine. Both engines come with a six-speed manual as standard, the petrol has the option of a seven-speed dual-clutch automatic and the diesel has a nine-speed torque converter auto. The Compass facelift will also be available with a four-wheel-drive system with a diesel surface-specific drive mode.

Jeep in India
Jeep is developing a new seven-seat SUV that will share its platform and powertrain with the compass but will be positioned to rival the likes of the Toyota Fortuner and Ford Endeavor. The seven-seater Jeep SUV is expected to be launched in 2022.

In addition to the seven-seater, Jeep has also announced plans to assemble the Wrangler and the next-gen Grand Cherokee locally. The manufacturer is also working on a sub-4m compact SUV for India.