Khatauli seat by-election: Why Tyagi Samaj announced to “boycott the BJP” for the upcoming assembly by-election 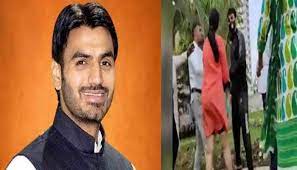 The Tyagi community has announced their decision to “boycott the BJP” in the upcoming by-election for the Khatauli assembly seat in Uttar Pradesh.

A community meeting was held at Nawala in Muzaffarnagar district on Saturday where the decision was announced.

The move by the community members comes after the recent arrest of former BJP member Shrikant Tyagi and the alleged “misbehavior” with his family by the Uttar Pradesh Police.

Tyagi-Brahmin-Bhumihar Morcha president Mangaram Tyagi said on Sunday, “It is a unanimous decision. We gathered in this village, which has a sizeable Tyagi population, to tell the entire community to stay away from the ruling party.” We can do it.” Never forget how the party treated Srikanth and his family.”

Deepak Kumar Tyagi, who was also at the meeting, said: “The BJP had got almost 99 per cent votes of our community in the past and in return they only harassed our people. The purpose of the meeting was to bring all our people together. ” platform.”

In August, Srikanth, who identified himself as a BJP member, was booked by the police for assaulting a woman in Noida after an alleged video went viral.

In Meerut the police arrested him and sent him to jail.

On 21 August, a ‘mahapanchayat’ was organized in Noida in support of Srikkanth.

The Khatauli assembly seat in Muzaffarnagar district fell vacant due to the disqualification of BJP MLA Vikram Singh Saini after his conviction in the 2013 Muzaffarnagar riots.

Voting for this seat will be held on December 5 and the counting of votes for the bypoll will take place on December 8.