Know Ghatsthapana’s spiritual science and its importance in Navratri 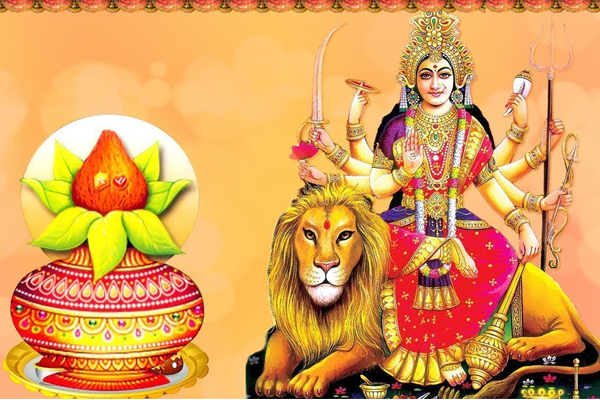 Sharadiya Navratri, the festival of Shakti worship, is going to start on October 17, Saturday. From the Pratipada date of Ashwin month to Navami date, 9 different forms of the Goddess will be worshiped. In many families, this fast is performed in the form of kulachar. This fast starts with Ashwin’s Shukla Pratipada. Today we will tell you how Ghatasthapana is done on Navratri and what is its significance: –

Ghatasthapana (sowing saptadhan by putting soil in clay or copper urn)
Ghatasthapana is performed on the first day of Navratri. Ghatasthapana means that during the time period of Navaratri, by invoking the power of the working force in the universe, it is employed. The painful waves present in Vastu are destroyed due to the working power. Water, flowers, durva, akshat, betel nut and coins are put in the urn.

Goddess Shodashopchar is worshiped in the method of Ghatasthapana. Some special remedies are also done with the method of Ghatasthapana. At the beginning of the pujavidhi, Achman, Pranayam, Deshkalakathana are performed. Thereafter, they resolve the fast. After the resolution, Shri Mahaganapati Pujan is performed. In this worship, coconut is used as a symbol of Mahaganapati. There should be no hindrance in the fasting ceremony and this is done so that the Goddess can be attracted to the place of worship in maximum quantity. After performing the Asana purification after worshiping Lord Mahaganapati, make a triangle with the bhoomi water. Thereafter, he keeps on reading. After asana purification, shandanas are performed for body purification. After that purify the worship material.

Grain sown on the altar
In Navaratri festival, do Ghatasthapana and Malabandhan as per the rituals. Bringing the soil of the field and making two porch chadar place, five or seven kinds of paddy are sown in it, keep (five or) saptadhanya in it. Barley, Wheat, Sesame, Moong, Chena, Samwan, Gram are Saptadhanya.

The amount of spiritual benefit derived from the grain sown in the soil on the altar is told by a table: –

In some places, they use linseed instead of barley, sandal than rice and gram instead of cornice. Soil is a symbol of the nature of earth. A portion of you and Tej is sown in soil as Saptadhan.

Potential profit from the item (percentage)

From this table, the importance of placing these things in the urn must have been clear. Our Rishimunis gave us this deep knowledge after studying these spiritual facts deeply. This also shows his greatness. Vedipara sows seven types of grains in the soil under Ghatasthapana in Navratri.

Scripture and importance of Ghatasthapana
In the soil or copper urn, you sow a portion of you and Tej as a saptadhan in the earth-like soil, with the help of the warm energy generated by the seed and produced in closed ghats, towards the waves producing the sound, in the short term, the ripple-like waves of the universe. Can occur. Due to the reflectivity of the earth in the clay urn, the attractive waves gain stability and help them to stay in the same place for a long time. Due to the copper urn, these waves are eclipsed and projected into the atmosphere and the entire Vastu benefits for decent times. Due to Ghatasthapana, the brightly colored rajatars of power are employed in the universe, which purifies the subtle-body of the worshiper.