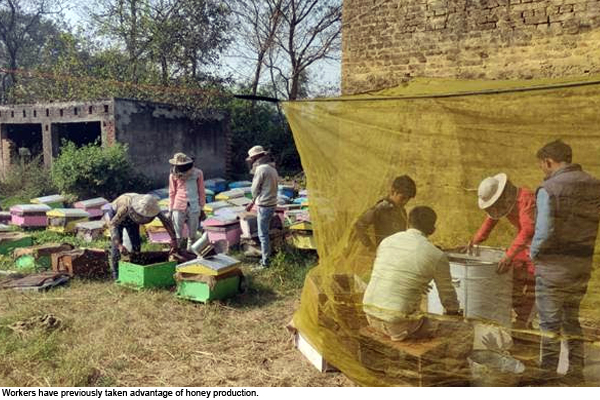 New Delhi: Self-continuity measures taken by the Khadi and Village Industries Commission (KVIC) in view of the Kovid-19 epidemic have started yielding good results. Migrant workers caught in the disaster joined KVIC’s honey mission in Uttar Pradesh in August. Workers have previously taken advantage of honey production. It is expected that production will increase from December to March.

Five migrant workers in Muzaffarnagar district of western Uttar Pradesh extracted 253 kg of honey from 50 boxes of bees. These boxes were given to him on 25 August this year. Apricot honey is sold at an average of Rs 200 per kg and at this rate migrant workers are expected to get around Rs 50,000. This means an average income of 10 thousand rupees of each beneficiary. After training of KVIC in the region, 70 migrant workers were given 700 boxes of bees. Honey will be extracted from the remaining bee boxes in the coming days.

These boxes of bees will receive at least 5 times honey in the months of December to March as the eucalyptus and mustard crops will peak during the season. Each of these boxes will yield 25 kg of honey in the peak season. Beekeepers will be able to send their boxes to Haryana, Rajasthan and eastern Uttar Pradesh. In these areas, bees will get enough pollen and nectar. They will be used in honey production.

President of KVIC, Mr. Vinay Kumar Saxena said that it is a pleasure to see the migrant workers join their roots and get self-employment. He said that the workers who went to their homes from other cities with honey mission were engaged in this work as part of the self-sufficient India campaign. Workers are earning a living on their own in just three months. Mr. Saxena said that the production of honey and the income of workers will increase manifold in the coming months.

The beneficiaries thanked KVIC for the support and said that the commission enabled us to earn our livelihood without going to other cities in search of work from beekeeping. Amit Kumar, the beekeeper of KVIC in Saharanpur district, said, “I thank the Prime Minister Shri Narendra Modi that his vision for a self-reliant India has created local employment for us.” We five workers received 50 bee boxes within three months. 253 kg of honey was extracted from these.’

In view of the Prime Minister’s call for self-reliant India, KVIC has involved hundreds of migrant workers in Uttar Pradesh and Bihar in honey mission, potter empowerment scheme and dignity projects. In addition to distributing the necessary equipment to them, KVIC also provided technical training to support the new beekeepers.