Home
My Voice
Learn how to worship Kanjak, Its importance and rules!

Learn how to worship Kanjak, Its importance and rules! 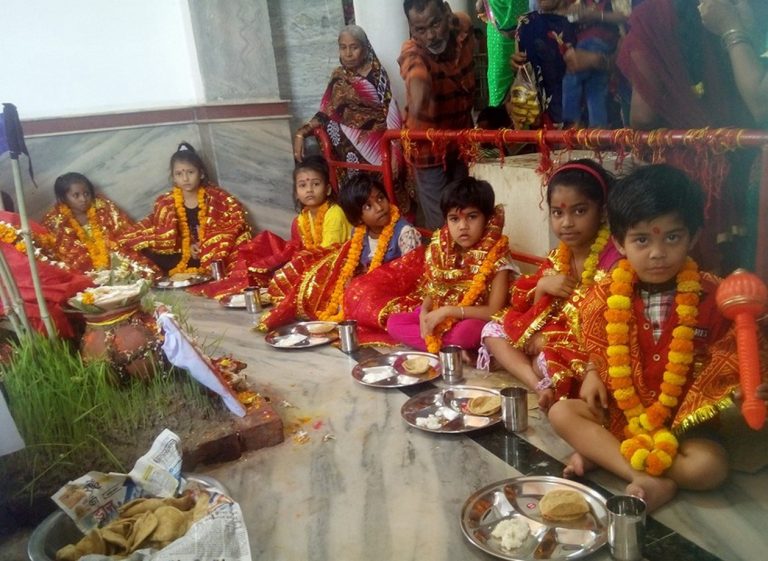 Devotees worship 9 different forms of Maa Durga during the nine days of Navratri. Devotees keep a fast of these 9 days to get the special grace of Mother Durga. During the fast, there is a law to worship 9 girls on Ashtami i.e. on the eighth day of the fast. By the way, some people also worship Navami. After worshiping the Kumariks on Ashtami and Navami, make them eat food made of pure ghee. Suhagin means manifest power and kumarika means covert power. There is some dissipation of the manifest power, hence the total power is higher in the kumaris than in the suhaagins. Therefore, Kumariyas are worshiped on the day of Kanjak worship.

How to do kumarika-pujan (Kanjak worship)?

Classical basis and importance of kumarika-pujan (Kanjak worship)
The ‘kumarika’ is a symbol of incognito power. Therefore, worshiping awakens the power in it and helps in attracting the bright waves of the universe towards it. After that, this element is easily projected into the atmosphere, due to which it helps to get the benefit of power-instantaneous waves through direct consciousness. For nine days, working on the waves of devatattva, to enrich his body, he is satisfied by worshiping Kumarika with devotion. Due to the lack of disclosure of rites in the kumarika, it is possible to get maximum benefits of divinity. Therefore, the importance of kumarika-pujan in Navratri.

Spiritual significance of other days of Navratri
Panchami, Shashthi, Ashtami and Navami have special significance after Ghatasthapana in the nine days of Navratri. On the day of Panchami, one of the nine forms of Devi is the fast of Shri Lalitha Devi i.e. Mahatripurasundari. Shukla Ashtami and Navami are these great dates. On these dates, Chandholm. Navmeepar surrenders sacrifice with Chandihom.

Lalitapujan on Panchami of Navratri
During the period of Navaratri, the smells of power are employed in greater quantity in the date of Panchami. The odor of this odor of powerfulness is known as ‘Lalita’. This is the reason why, Panchami which comes during the period of Navratri is called ‘Lalithapanchami’. By worshiping the Goddess on Panchami, these odorous colors present in the universe are drawn towards the place of worship. Due to the function of these deodorants, purification of the psyche of the priest.

Importance of Navratri Shashti Tithi
On the day of Shashthi, special worship of the Goddess is done and the goddess is also worshiped. During this period, the devotees do Jagran overnight, which is also called Jagrata in North India. It is a part of the worship of the Goddess. In which bhajan-kirtan related to the Goddess. Similarly, some people in Maharashtra sing songs of ‘Vaghya-Murli’ and hymns of Sant Eknathji, popularly known as Bharud. This awakening is called ‘Gondha’ in Maharashtra. Special people are called to sing hymns praising the Goddess. Goddess is worshiped. Special lamps are made by wrapping clothes on wood. Such a lamp is called ‘Divinity’. We lit these lamps by worshiping them. Sing songs with special percussion.

The classical basis for awakening in Navratri
Awakening, it is related to the manifestation of the working energy of the Goddess. During the period of Navaratri at night, the element of Shri Durgadevi gives strength to the person to work through the power of desire, action and knowledge on the power of this work. By awakening, because of fasting, a person who has become sattvik is able to easily acquire the elements of desire, action and knowledge of Shri Durgadevi working in the environment at these three levels. As a result there is also awakening of the existing Kundalini’s chakras in his body. This awakening helps him to move forward on the spiritual path. This is the reason, the scriptures have stated the importance of fasting and awakening during the Navratri period.

Special worship of Shashthi in Durgapujan in Bengal
Sharadiya Durga Puja is celebrated ten days in Bengal. In the evening of Pratipada, Shri Durgadevi is invoked and establishes them in a vine tree. This is called ‘occupation of Shri Durgadevi’ or ‘small cats’. On the sixth day, that is, on Shashthi, they worship him in a vine tree. In this worship, various types of fruits, flowers, letters and grains are offered to the Goddess. In this worship, the flowers of the vine are specially used. This worship is called ‘Big Bill’. It is believed that mother Durga dwells in the vine tree from the first day of Navaratri, that is, in this period, the power of attraction remains stored in the vine tree. Special worship and rituals are performed on the day of Shashthi.

Worshiping Kaalratri form of Goddess on Saptami of Navratri
On the day of Saptami, people who destroy the demons, demons, ghosts etc. of the Goddess worship the form called ‘Kalratri’. In Bengal, bringing water in five kalas from Saptmipar river or any reservoir of Durgapuja, the Ghatasthanas are done for Shri Ganesh, Shri Mahalakshmi, Kartikeya, Saraswati Devi and Durgadevi. The notable part here is that, from this day onwards, the banana peddler is dressed in yellow saree with the idol of Shri Ganesh and worship him as a symbol of the power of Shri Ganesh.

Durgashtami (Mahashtami)
There is the importance of performing many rituals of the Goddess on Durgashtami. Therefore it is also called ‘Mahashtami’. In the period between the dates of Ashtami and Navami i.e. between the date of completion of Ashtami and the beginning of Navami Tithi, the Goddess holds Shakti Dharna / Shakti, hence, at this time, we have special worship of ‘Chamunda’ form of Shri Durgaji, which is called ‘Sandhipujan’. it is said.

On the day of Mahashtami, there is a stunning arrival of Sarasvatittattva in the universe with the idea of ​​BJP. This is called the ‘invocation of Saraswati element’. During this period, the form of Shakti is transmitted with intelligent brilliance. These are waves of asterisks of power. During this period, the touch of the stars of Saraswati awakens the soul’s self-power and transforms into wisdom. Therefore, the worshiper experiences bliss.