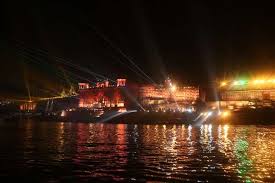 This is the first and the 23rd total visit of PM in Varanasi after the Corona period. However during the lockdown, he was connected to the people of his constituency through video conferencing and telephone. On 9 November, he also handed over 33 projects worth Rs 620 crore to Kashi. Now arriving today, the PM will inaugurate the National Highway Authority’s Rs 2447 crore Rajatalab-Handia Sixlane Project at Khajuri near Rajatlab. He will also address a gathering of 5000 BJP workers here.

According to protocol, he will reach Babatpur Airport by his plane at 2.10 pm. From here, the army helicopter will land at Khajuri. Kashivasi is excited about the welcome of the MP and PM who are coming after about nine months. The intersections, roads and buildings from the city to the village were bridged by the saffron flag. Hoardings and banners of central government schemes and PM’s achievements are also seen everywhere. He will also leave for Delhi at 8.50 pm.

Ghat will be illuminated with the lighting of PM’s lamp: This will be the first time on Dev Deepawali when the Prime Minister will be the chief guest of Samorah. However, in past years many Prime Ministers were invited. With the first lamp of the Prime Minister lighting the first lamp at Rajghat at about five in the evening, the ghats will be lit with all the lights. For the first time this year, a total of 1.5 million lamps will be lit in Gangapar along with a lamp. Cultural programs will also be organized by the Department of Culture at 15 major ghats.

After the Deepdan, PM will view the Deepdan on both sides of the Ganga for an hour through cruise. While traveling in the Ganges from Rajghat to Ravidas Ghat, stop in front of Chet Singh Ghat and will also see a laser show based on Ramayana here. Prior to this, he will visit the Kashi Vishwanath temple and observe the works of the corridor as well.
Light and sound show based on Buddha’s life will be seen in Sarnath

The Prime Minister will travel 40 km from the Ganges Ghat to reach Sarnath. He will watch a light and show based on the life of Lord Buddha here for about half an hour. The telecast will be shown above the Dhammek Stupa. Here he will also meet the Chancellor and teachers of the Tibetan Institute.