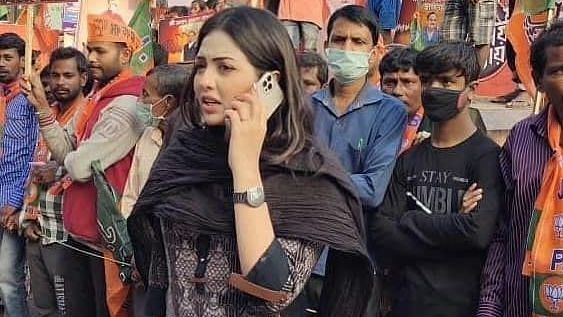 Sources in the Kolkata Police have claimed that the father of Pamela Goswami, the leader of BJP’s youth wing, said that Pamela became a drug addict under the influence of a friend. Kaushik Goswami also asked the police to keep an eye’ on Pamela’s friend Prabir Kumar Dey.

Prabir Kumar Dey was arrested on Friday 19 February along with Pamela. Kolkata Police has said that Kaushik Goswami wrote a letter to the City Police Chief stating that Prabir had converted Pamela into a drug addict. The police allegedly cited Kaushik as saying that Prabir had not kept a promise to divorce his wife and marry Pamela.

“We were tracking both and collected information about involvement in drug trafficking. We are questioning them and trying to find out if all the people involved are involved and whether they have inter-state or drug racket ties.] “2016

Sources in the police say that Pamela Goswami and Prabir Kumar Dey had been living together for some time.

Pamela Goswami, who was presented in Alipur court, said that Rakesh Singh of BJP, an aide of Kailash Vijayvargiya, should be arrested.

Pamela Goswami said that I need a CID investigation. Rakesh Singh of BJP, an ally of Kailash Vijayvargiya, should be arrested. This is his conspiracy, which is being taken from the court for police lock-up.

In response to the allegations, Singh was quoted by India Today as saying, “It is very easy to complain, but it is difficult to prove. Pamela will be able to explain why she took my name. All I can say is that I To discredit. ” A plot to do it. I do not trust this kind of dirty politics.

According to Rakesh Singh, it was also alleged that Goswami was “brainwashed” by Kolkata Police. If I join, they can call me or Kailash Vijayvargiya or Amit Shah. I think the police brainwashed him. I have not been in contact with Pamela for a year and a half.

Meanwhile, the West Bengal BJP said that Goswami was likely to be suspended from the party. “The party will take some disciplinary action against her until she is proved innocent. The incident is damaging the party’s reputation.”

Pamela Goswami, her friend Prabir Kumar Dey, and her personal guard Somnath Chatterjee were arrested by Kolkata Police in a car in Alipur area of ​​the city, The Telegraph reports. Upon searching her bag, reportedly found 100 grams of cocaine. “

“She was involved in drug trafficking for a long time. A police officer was quoted by the news agency as saying that today we came to know that she is reaching the spot with her supplier Prabir to hand over the drugs to the buyers.