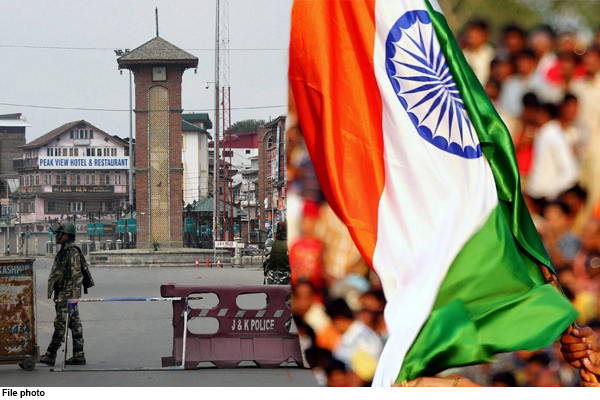 New Delhi: Jammu and Kashmir Police on Monday detained three leaders of BJP Kupwara unit, who tried to hoist the tricolor at Clock Tower, Lal Chowk, Srinagar this morning. J&K police said that 3 BJP workers of the party’s Kupwara unit reached Lal Chowk near the Ghanta Ghar this morning, including party spokesman of the Kupwara unit Mir Basharat and two other leaders Mir Ishfaq and Akhtar Khan. At present, the three are being arrested and questioned.

BJP spokesperson of Kupwara, Mir Basharat told the media that he had come to hoist the tricolor at Lal Chowk to give a message to the People’s Alliance members to secretly declare that there would be only one national flag in Kashmir. Today we came to celebrate the day when Maharaja Hari Singh signed the agreement with the Center. He said that our message is to Mehbooba Mufti, Omar Abdullah and all other members of PAGD that only the tricolor will be hoisted in Kashmir.

Let me tell you that on Saturday, some protesters hoisted the tricolor and shouted slogans at the PDP office to protest against the insult of the tricolor of PDP President Mehbooba Mufti. During this time, there was a fierce protest of protesters along with PDP leaders present in the office.

Conflicting statement of Mehbooba Mufti
Former Chief Minister and PDP chief Mehbooba Mufti, who was under house arrest for 14 months, has started giving vent to separatism in Kashmir valley as soon as released. Mehbooba Mufti has also clarified her separatist thinking on Friday following the statement of senior National Conference leader and former CM Farooq Abdullah to restore 370 with the help of China. He said in the press conference that he is not comfortable with today’s India.