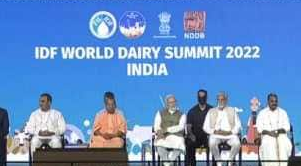 The four-day IDF WDS 2022 is being held from September 12 to September 15 at the India Expo Center & Mart in Greater Noida, Uttar Pradesh. According to the statement, around 1,500 participants from 50 countries are expected to participate in the IDF WDS 2022. According to the Prime Minister’s Office, the last such summit was held in India in 1974.

“The Indian dairy industry is unique in that it is based on a cooperative model that empowers small and marginal dairy farmers, especially women. Driven by the vision of the Prime Minister, the government has taken several steps for the betterment of dairy. Milk production has increased by over 44 per cent in the last eight years,” the PMO said.

“The success story of the Indian dairy industry, which accounts for about 23 per cent of global milk, produces around 210 million tonnes annually, and empowers over 80 million dairy farmers, will be showcased at IDF WDS 2022”