Home
Entertainment
‘Scam 1992—The Harshad Mehta Story’: Even the retell is captivating

‘Scam 1992—The Harshad Mehta Story’: Even the retell is captivating 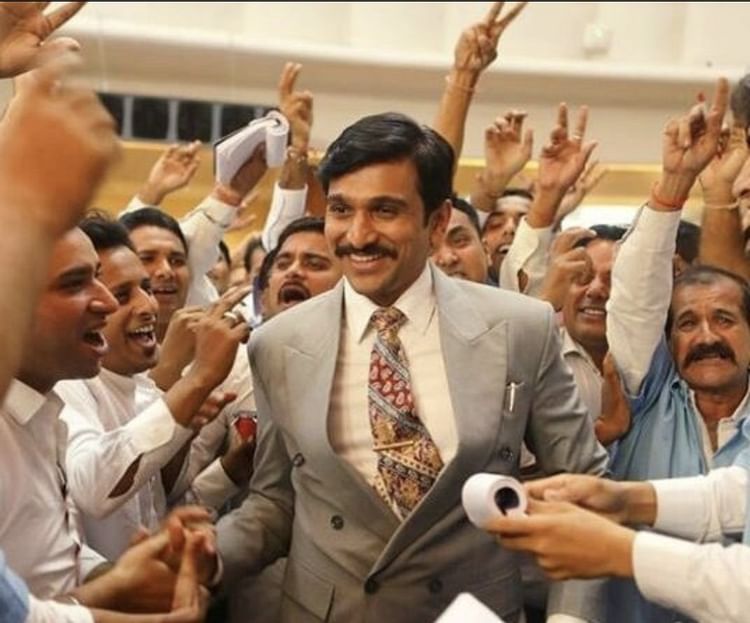 Here’s another throwback web series that wonderfully captures one of the biggest shocks the Indian economy went through in the 1980s and 1990s. And of the man behind it.

In the metropolis then called Bombay (now Mumbai), “Scam 1992” narrates the life of Harshad Mehta, an unassuming broker who took the bulls to town and the stock market to dizzying heights. Of course, it was followed by his inevitable and catastrophic downfall.

Directed by National Award-winning filmmaker Hansal Mehta, the series is based on journalist Debashis Basu & Sucheta Dalal’s book “The Scam”.

‘Scam 1992—The Harshad Mehta Story’ is a magnum opus — look at the actors’ roster. The 10-episode series, running for about 450 minutes, boasts of the cinematic talents of Pratik Gandhi (the hero’s friend in “Loveyatri” and a big name in Gujarati theatre) as Harshad; Shweta in her stunningly realistic role as Sucheta Dalal; Anjali Barot in a lovely turn as Harshad’s low-profile, caring and intense wife; Chirag Vohra as Bhushan Bhatt, Harshad’s right-hand; Rajat Kapur as the wily and ruthless CBI officer Madhavan; Shadaab Amjad Khan as Ajay Kedia; Satish Kaushik as Black Cobra; Mithilesh Chaturvedi as Ram Jethmalani; KK Raina as Pherwani; Ananth Narayan Mahadevan as Venkitarajan and Hemant Kher as Harshad’s elder brother Ashwin.

The story begins in 1992, with flashbacks to 1979, and ends in 2001. The subject is ‘Big Bull’ Harshad Mehta, in whose lifetime there was a bull run for the stock market: a run that was bizarre, audacious and unethical!

Mehta, known as the Bachchan of the Bombay Stock Exchange, managed incredible feats, at first minus harm to anyone except for his rivals or enemies in the field. Raised in a lower middle-class Gujarati family living in a chawl, he had an impossible dream, and he managed to achieve it.

Mehta never stopped. He become more ambitious, and money meant almost all to him. But, as a Gujarati, he also loved his wife and kids, lived in a joint family with his parents and elder brother and sister-in-law. He never womanized, drank alcohol or was prey to any major vices. He had the gift of the gab, and the temerity and luck to prove what he claimed and promised. But he never realised his limits.

As the owner of a high-rise apartment with a swimming pool, a fleet of cars led by a Rs. 4.5 million (in the early ’90s!) Lexus (for which he paid a million more just to score over a rival!), he thought he could do no wrong even when he was doing precisely that! A demi-god to the public for the way he was making them rich, he never dreamt that he would be held accountable when his methods became questionable — and remained so for years.

A doughty and bold Times of India journalist, Sucheta Dalal (Shweta Dhanwanthary) relentlessly went after him for months, and finally a Pandora’s Box of machinations and rot in the system — India’s and international banks, institutions abroad, India’s leading companies and even fraudulent ones that did not exist, and finally, the politicians all the way to the Central government finally exposed an incredible scam of over Rs 500 billion!

But Mehta’s fight was far from over, even as tonnes of cases were filed against him by every conceivable agency and bodies like Income-Tax, Enforcement Directorate and many more. Sucheta stuck to her guns, helped by a colleague who fell in love with her, Debashis (Faisal Rashid), and not only married her but co-authored the book on which this incredible story is based. The screen version of Sucheta narrates the story, beginning with a tip-off she received from an anonymous and supposed State Bank of India employee, Sharad Bellary (Sharib Hashmi).

The adaptation, the merging of real and dramatic, is fantastically done. For Hansal Mehta, the film does a lot more than just credit. Achint Thakkar’s original title music is stunning and the background score amazing. The use of old Hindi film and even non-film songs is also brilliantly done. The camerawork (Pratham Mehta) and production design (Tarpan Srivastava and Payal Ghose) are of high quality.

But the main strength of the film is the dialogues by Vaibhav Vishal and Karan Vyas — a stupendous and perfect blend of realistic and “filmi dialoguebaazi” and the magnificent performances.

In the narrative, the maximum impacts come when real footage is merged with the storytelling, like Ram Jethmalani actually accusing Prime Minister PV Narasimha Rao of complicity (in the scam), and also when Sucheta takes someone to show the actual closed and derelict office of Mazda, whose shares under Harshad Mehta are touching the sky!

The film also balances emotions well. We do feel a bit for Harshad’s resourcefulness and his final condition, but juxtaposed against the seemingly cold-blooded investigation of facts by the conscientious Sucheta are stories of how hundreds of the victims of the scam were destroyed, and many even lost their lives.
All the messages hit home.

This series is “unmissable.”