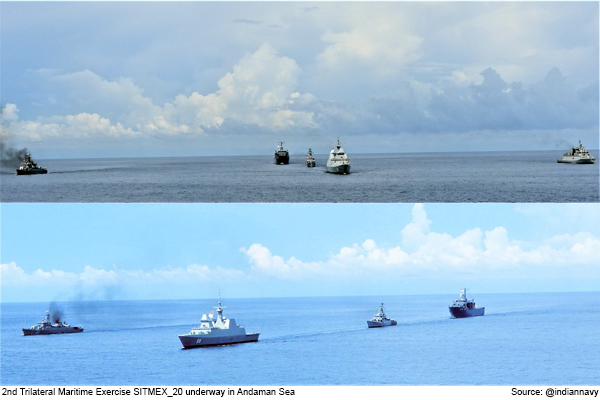 New Delhi: The Indian Navy’s indigenously built ASW Corvette ‘Kamorata’ and Missile Corvette ‘Karamukh’ ships will participate in the second edition of Sitamax-20, a trilateral peacekeeping exercise of India Singapore and Thailand. This exercise is taking place in Andaman Sea on November 21-22, 2020.

The first version of Sitmax organized by the Indian Navy was carried out on September, 2019, in Sagar, some distance away from Port Blair. These exercises of the Sitamax series are conducted between the Indian Navy, the Republic of Singapore Navy (RSN) and the Royal Thai Navy (RTN) for mutual cooperation and development of interoperability. The 2020 edition is conducted by RSN.

The exercise is being conducted only in the ocean (non-contact, at sea only) in view of the Kovid-19 pandemic. It aims to develop co-ordination, cooperation and partnership between the three friendly countries and peacetime neighbors. In this two-day tranquil exercise, the three navies are doing various exercises like surface combat exercises, weapons firing and naval feats.

In addition to improving interoperability between these friendly navies, the sitmax series of exercises are aimed not only to strengthen mutual trust but also to develop mutual understanding and procedures to enhance security in the peacetime in the region.