UP Police cars unsafe for goons: Another turns turtle, only gangster killed 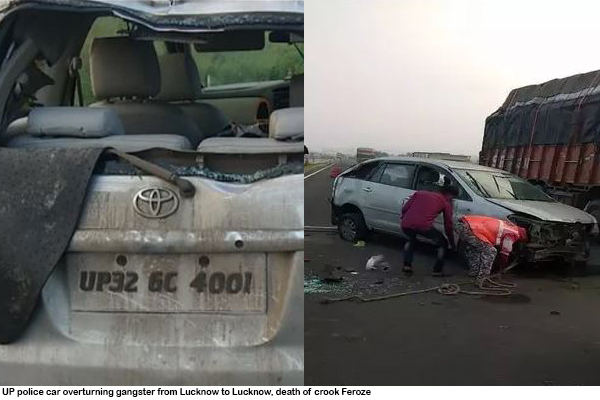 Lucknow: It seems that a spot of ill luck envelops dreaded gangsters while they are being transported in UP Police vehicles. This, or the cops almost always have no intention to deliver a fugitive alive to the courts. In either scenario, the only reported fatality in such cases turns out to be the ‘bad man’.

Take the latest example in a series of such “accidents” where, of all the occupants of a police car, the uniformed men escape with minor injuries but the local dabangg somehow always becomes a casualty.

According to Hindustan, a UP Police vehicle overturned in Madhya Pradesh’s Guna district early on Sunday. Interestingly, it was bringing back a wanted criminal, Feroze alias Shami, who was earlier arrested in Mumbai.

Feroz was wanted for six cases registered against him in Thakurganj Kotwali.

Now, the Guna “accident” conveniently killed Feroze. Four others – three policemen and circle in-charge Jagdish Pandey – were merely injured in the incident. Police commissioner Sujit Pandey has sent a team to Guna along with the families of Feroz and the injured cops.

Pandey said that Feroze was a resident of Bahraich under the jurisdiction of Thakurganj Kotwali. “He was on the run since 2014. Only thereafter was the Gangster Act imposed on him,” the commissioner added.

A Thakurganj police team left for Mumbai on September 25 by road after being tipped off that Feroze had been seen in Mumbai three days back. It included Jagdish Pandey, constable Sanjeev Singh, an informer and the driver. On Saturday night, the team arrested Feroz with the help of Mumbai Police.

Feroz’s non-bailable warrant was obtained from the court and the UP Police team started for Lucknow with him at 3 am on Sunday.

Around 7 am, a nilgai suddenly came in front of the car near Chachoda area in Guna. The speeding vehicle lost control in an attempt to avoid hitting the animal, and overturned. All the five persons in the car were hurt in the accident.

The injured were rushed to a hospital where Feroze was declared brought dead. The police team members are being treated.

As soon as the news reached Lucknow that Feroze had died in the car accident and that the accompanying policemen were seriously injured, there was palpable tension in the police department. The police commissioner took full information of the matter from the SP of Guna and asked him to help the injured.

Sujit Pandey also spoke to the families of the injured policemen and dispatched a team to Guna with financial aid. As a humanitarian gesture, the family of Feroze was also sent along with this team.

Earlier, we were told how Vikas Dubey was gunned down in an encounter when he tried to flee from a car which had overturned on a divider. However, there seemed no due diligence in investigating whether the “accident” was a conspiracy.