Home
World
There is still hope for Donald Trump, Trump has advantage in tiebreak situation

There is still hope for Donald Trump, Trump has advantage in tiebreak situation 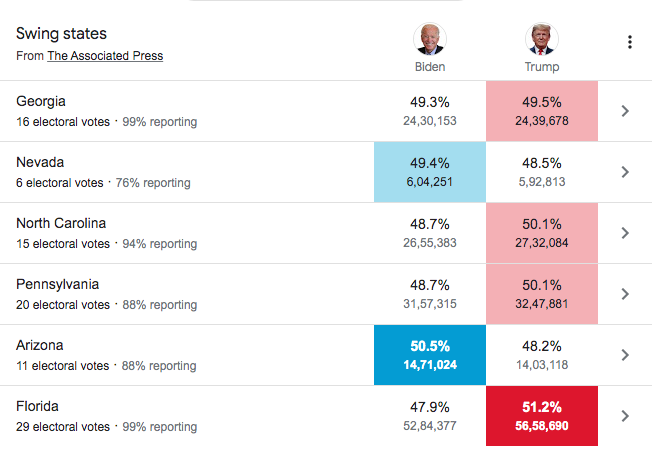 As per result from remaining states Donald Trump can get maximum 54 votes which will be still short of magic figure of 270. As far Joe Biden is concern he can get another 10 votes from his leading states but margin is very thin.

Mr. Trump’s chances of winning a second term depended on his ability to hang on to his leads in states like Georgia and Pennsylvania — where Mr. Biden has been narrowing the gap as vote counting progresses — and on overtaking Mr. Biden in one of the states where he is currently ahead.

The presidential battlefield is narrowing to a smaller number of states, with both President Donald Trump and Democrat Joe Biden still having paths to victory. Biden now has 238 electoral votes to Trump’s 213.

Biden’s victory in Arizona, a state Trump won in 2016, gives him more breathing room as the “Blue Wall” states remain uncounted. Even without Pennsylvania, Biden could now reach exactly 270 electoral votes — the minimum necessary to win — if he can win Michigan and Wisconsin, as well as Nevada, where he was leading early Wednesday.

Those states still have significant numbers of votes outstanding from absentee voters and large urban counties that tend to vote Democratic. Election officials in both states said it would be later Wednesday before they could finish counting those votes.

The difference-maker for Biden could end up being a single electoral vote from the second congressional district of Nebraska, one of two states that splits its votes. Trump won that district in 2016 but Biden won it Tuesday.

Georgia and North Carolina would give Biden additional options, but Trump appears to have leads in both those states. A Biden win in Nevada, a state Clinton won in 2016, wouldn’t help him gain ground on Trump.

Trump needs at least four of the following states to pass 270 electoral votes: Georgia, North Carolina, Michigan, Pennsylvania, and Wisconsin. He won them all in 2016. If Biden wins any two of Michigan, Wisconsin, Pennsylvania and Georgia, he’ll win.

There is a scenario in which the race could come down to a single electoral vote — or even a tie. Maine also splits its votes by congressional district, and one of its two districts remains up for grabs.

If Trump wins that vote — and loses Wisconsin and North Carolina — both Biden and Trump will have 269 electoral votes. In that case, Trump would likely win the tiebreaker vote in the House of Representatives, where each state delegation gets a single vote.