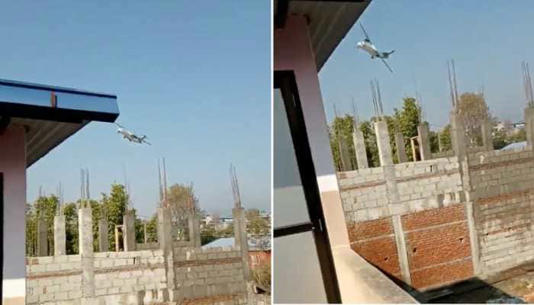 Two infants, four crew members and 10 foreign nationals Sudarshan Bartaula were on board the ATR 72 aircraft going from Kathmandu to Pokhara. Now an unconfirmed video has surfaced online that shows the last moments of the plane before the crash.

As can be seen in a video made by a local resident from a building near the airport, Yeti Airlines aircraft dressed in green and white livery can be seen approaching the Pokhara airport runway. The aircraft is at an approach angle and the tail is down, but it soon turns hard to the right at about 90 degrees, before disappearing behind another building.

Nepal has a poor air safety record due to the harsh terrain and use of small aircraft. Air accidents are not uncommon in Nepal, home to eight of the world’s 14 tallest mountains, including Everest, as the weather can change suddenly and create dangerous conditions.

Local television showed thick black smoke billowing from the crash site as rescue workers and crowds of people gathered around the wreckage. According to flight tracking website FlightRadar24, the aircraft was 15 years old.

The ATR72 is a widely used twin-engine turboprop aircraft produced by a joint venture between Airbus and Italy’s Leonardo. According to Yeti Airlines’ website, it has a fleet of six ATR72-500 aircraft.