Home
Nation
Vijay Diwas 2020: All you need to know about 1971 Indo-Pak war and birth of Bangladesh

Vijay Diwas 2020: All you need to know about 1971 Indo-Pak war and birth of Bangladesh 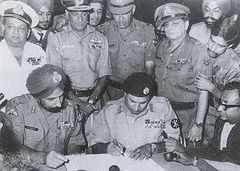 New Delhi: Vijay Diwas is observed every year on December 16 as a mark of victory over Pakistan in the 1971 war that also led to the creation of Bangladesh. Today, PM Narender Modi, Defence minister Rajnath Singh and many leaders paid tribute to martyrs. The 1971 Indo-Pak war lasted for almost 13 days and ended on December 16. On this day, the nation pays tribute to brave soldiers of India and Bangladesh who laid down their lives in the line of duty.

History of Vijay Diwas
The 1971 Indo-Pak war lasted for almost 13 days and ended on December 16. Pakistan’s Army General Amir Abdullah Khan Niazi surrendered before the Indian Army and Mukti-Bahini leading to the creation of a new state in India’s east called Bangladesh. Gen. Niazi surrendered along with his 93,000 Pakistani troops. Bangladesh also celebrates its Independence Day (Bijoy Diwas) on December 16 annually. Since then, the day is observed as Vijay Diwas.

Importance of Vijay Diwas
On this day, the nation pays tribute to brave soldiers of India and Bangladesh who laid down their lives in the line of duty and those who took part in the Liberation War.

The ‘liberation war’ in the then East Pakistan was initiated after Pakistan ill-treated its Bengali speaking population and undermined elections results in the region. The then Indian Prime Minister Indira Gandhi had expressed India’s full support for the liberation war in Bangladesh.

Migrant influx
According to reports, there were reports of a massacre of Bengali especially Hindus by the Pakistan army. At least 10 million people were forced to migrate to India during the war. Other reports also suggested that the iconic Taj Mahal was camouflaged by leaves during the war to save it from any Pakistani attacks.

‘Swarnim Vijay Varsh’
This year also completes 50 years of India’s victory over Pakistan. The government is organising ‘Swarnim Vijay Varsh’ programme where Prime Minister Narendra Modi and defence minister Rajnath Singh will also mark their presence. The event will be organised at the National War Memorial in New Delhi.

Amar Jawan Jyoti
Amar Jawan Jyoti is symbolised by an inverted bayonet and soldier’s helmet over it with an eternal flame burning beside it. It was built in 1972 underneath the India Gate arch to commemorate soldiers martyred in the Indo-Pak War of 1971.

National War Memorial
Last year PM Modi has  inaugurated the country’s National War Memorial (NWM) adjoining the iconic India Gate complex in the heart of the capital, nearly 60 years after it was mooted to honour the fallen soldiers after Independence. This was demanded for long time in memory of Martyers.

Spread over an area of approximately 40 acres, the memorial comprises four concentric circles, namely- the ‘Amar Chakra, the Veerta Chakra, the ‘Tyag Chakra’ and the ‘Rakshak Chakra’ with names of 25,942 soldiers inscribed in golden letters on granite tablets.

PM Modi will light ‘Golden Victory Torch’
Today, 50 years of this historic event has been completed. Prime Minister Narendra Modi will light the “Golden Victory Torch” from the Amar Jyoti of the National Summer Memorial in the capital today. Four victory torches will be lit by a flame burning continuously at the National Summer Memorial and will be taken to various parts of the country including the villages of the Paramveer Chakra and Mahavir Chakra winners of the 1971 war. The soil of these winners’ villages as well as the 1971 battle sites will be brought to the National War Memorial in New Delhi