Home
My Voice
You are intoxicated with power: Anna Hazare hits out at Kejriwal over Delhi ‘liquor scam’

You are intoxicated with power: Anna Hazare hits out at Kejriwal over Delhi ‘liquor scam’ 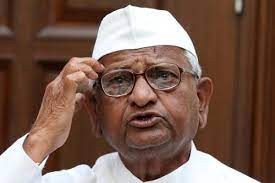 Once a participant in the Lokpal movement, Anna Hazare in a letter on Delhi’s ‘liquor scam’ slammed Chief Minister Arvind Kejriwal and accused him of “drunken to power”. News18 has access to a letter written by Hazare to Kejriwal on August 30.

“It does not suit a political party born out of a larger movement. Like other parties, you too seem to be trapped in the vicious circle of power with money and money. You have brought a new liquor policy, which will increase the consumption of liquor and contracts will open in every street. This was not in the interest of the public and would lead to corruption. Just as alcohol intoxicates someone, there is also the intoxication of power. Looks like you are submerged afterward,” Hazare wrote to Kejriwal. He further said that he is hurt by the news reports regarding the ‘liquor scam’ in Delhi.

The anti-corruption crusader also referred to excerpts from a book titled ‘Swaraj’ written by Kejriwal before entering politics in which Kejriwal wrote about the ills of alcoholism which have the potential to destroy the lives of families and cause serious problems. Is. The book also mentions that no new license to open a liquor shop should be given until the Gram Sabha has approved it and 90% of the women present in the Gram Sabha meeting approved the decision. Kejriwal has written in his book that in the meeting of the Gram Sabha, women can ensure the closure of liquor shops in their area even with a simple majority.

“But it seems that after joining politics you have forgotten your philosophy and hence you have made such liquor policy for Delhi. In your early days, both you and Manish Sisodia visited my village Ralegansiddhi in Maharashtra, where we have closed liquor and tobacco shops for the last 35 years. You praised me in this matter.

Hazare further wrote that the new liquor policy in Delhi shows that Kejriwal and Deputy CM Manish Sisodia have damaged the ideals of the historic anti-corruption movement and are now working on the lines of other political parties in the country which are “tragic”.

Hazare further said that after becoming the CM, Kejriwal has forgotten the issue of Lokpal and Lokayukta Act, on which he had given big speeches earlier as an anti-corruption activist. “You made no effort to enact a strong Lokayukta law in the state assembly, but created a disastrous liquor policy that would destroy the lives of many people, including women. Hazare wrote to Kejriwal, ‘This shows that there is a big difference between your words and deeds.