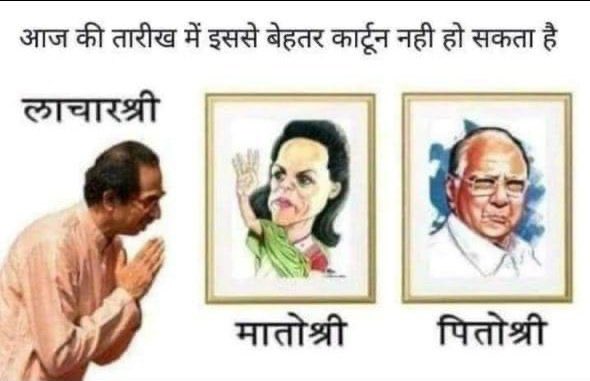 New Delhi: The beleaguered Shiv Sena was in the eye of another storm when its overzealous cadres on Friday severely beat up a retired Indian Navy officer who had forwarded on WhatsApp a cartoon message featuring Uddhav Thackeray.

Around 10 Shiv Sainiks beat up 62-year-old Madan Sharma, a former Navy officer, in Mumbai. He said: “Earlier, I had received threatening calls for a message I had forwarded on WhatsApp.
I have worked my whole life for the nation. Such a Government should not exist.”

In connection with the attack, the police has arrested six persons. However, human rights activists point out that they were charged with Sections not commensurate with their dastardly act.

In a shocking development, the arrested Sena goons were granted bail within 24 hours. Mumbai Police has reportedly said that the Sections under which they were charged were bailable.

Meanwhile, Kangana Ranaut shared a video of the beating of the former officer and wrote: “Shame, shameful. What is happening in Mumbai? Shiv Sainiks beat up an Indian Navy officer. He was beaten up just because he had forwarded a WhatsApp post on CM Uddhav !!! Imagine what he would have done to @KanganaTeam if she was not protected by the Central Government.”

It is pertinent to note that Shiv Sena founder Balasaheb Thackeray started his career as a cartoonist. Uddhav’s cousin Raj Thackeray, who was once in the Shiv Sena, is also a cartoonist.

Retired Navy officer Madan Sharma, a resident of Kandivali, had forwarded on WhatsApp a satirical cartoon featuring Chief Minister Uddhav Thackeray, NCP president Sharad Pawar and Congress president Sonia Gandhi. The Shiv Sena cadres did not take kindly to it and reached Madan Sharma’s Thakur housing complex in the afternoon. In the ensuing melee and manhandling, Sharma suffered injuries to his hands and eyes.

BJP MLA Atul Bhatkalkar condemned the incident, saying that Madan Sharma was attacked by Shiv Sainiks. “This attack has hurt Sharma a lot,” he said. Bhatkhalkar has demanded action against the culprits of the case, saying that now the Shiv Sainiks have swooped down to such levels that they have started attacking retired jawans for criticising the Chief Minister.

“The high-handedness of the ruling Shiv Sena is constantly increasing. If the Shiv Sena feels that the people of Mumbai and the state will be scared by such goons, it is an illusion of the party and the Chief Minister. People will remove this arrogance of power when the right time comes,” he said.