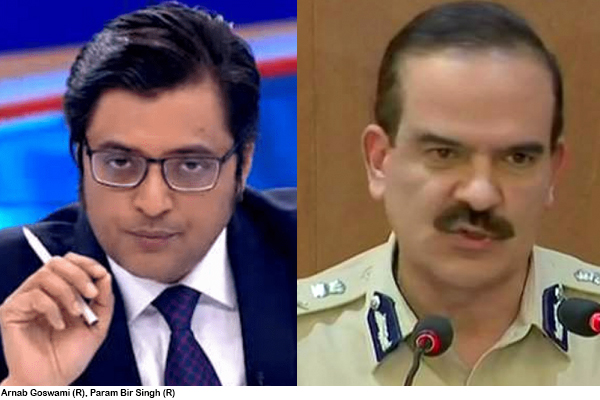 New Delhi: The Mumbai Police on Thursday claimed that its crime branch has busted a television rating points (TRP) manipulation racket. The owners of two TV channels, Fast Marathi and Box Cinema, have been arrested for TRP fraud and the owner of the third channel, Republic TV, is yet to be summoned. Mumbai Police Commissioner Parambir Singh told reporters at a press conference that Republic TV promoter Arnab Goswami would soon be questioned in the TRP fraud case.

Broadcast Audience Research Council (BARC), the body that gives rating points to TV channels in India. Brak was already suspected of manipulating Republic TV’s system. Hansa Research, the company that installed these rating boxes named Brach on behalf of Brak, had filed a case with the Mumbai Police, stating that some former employees of Hansa Research had set up or sold those barometers. Was. The data of these channels is being closely monitored and kept secret.

Data about barometric homes were obtained by these channels. They used to pay these families to watch the channel, even when they were not watching it. In some cases, it also happened that houses that did not understand English, used to watch the Republic all hours. Mumbai Police Commissioner Param Bir Singh said that this connivance kept Republic TV’s TRP high. The same strategy was used by Fast Marathi and Box Cinema channels. The Republic channel is run by Arnab Goswami, known for sharp debate on every issue.

Manipulation of viewership helped Republic and the other two channels reach the top position for inappropriate times and these channels charged more than advertisers. The TV advertising market in India is more than Rs 30,000 crore and all channels compete for their share based on their viewership. By increasing its viewership, Republic TV and the other two accused channels were earning more than their stipulated advertisements.

The Criminal Intelligence Unit of the Crime Branch has arrested two TV channel owners and seized Rs 28.5 lakh from them. Arnab Goswami is a big fish and a well-known name across the country. The Mumbai Police has informed the Ministry of Information and Broadcasting in Delhi about the fraud. Police Commissioner Parambir Singh said that the police would raise questions and whoever would take action against the channel, Arnab Goswami, being not only an owner but a journalist, as a mediaman to block any attempt to arrest him Will exercise its rights.