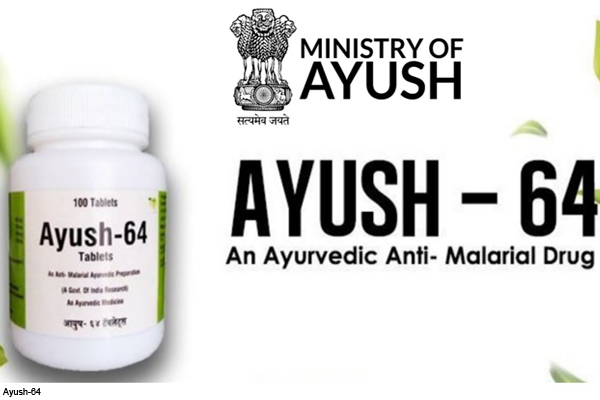 New Delhi: Amidst the worldwide havoc of the Covid-19 pandemic, the ‘Ayush 64’ drug has emerged as a ray of hope for patients with mild and moderate Kovid-19 infection. Scientists from the country’s premier research institutes have found that Ayush 64, a poly herbal formula developed by the Central Ayurveda Research Council (CCRAS) of the Ministry of AYUSH, adjunct to standard care (adjunct to standard care) for symptomatic, mild and moderate Covid-19 infections. ) Is beneficial. It is noteworthy that Aayush 64 was originally developed as a malaria drug in the year 1980 and has been repurposed for Kovid 19 infection.

Recently, a comprehensive and intensive multi-center clinical trial has been completed by the Ministry of AYUSH and CSIR to evaluate the efficacy and safety of AYUSH 64 in the management of mild to moderate Covid-19 infection. .

AYUSH 64 is composed of medicines like Alstonia scholaris, Picrorhiza kurroa, Swertia chirata and Caesalpinia crista. It is based on extensive scientific research and is a safe and effective Ayurvedic medicine. Taking this medicine has also been recommended by the National Clinical Management Protocol based on Ayurveda and Yoga based on Ayurveda and Yoga, which is the oversight of the National Task Force on COVID Management of ICMR. Was released after.

Dr. Arvind Chopra, Director of Pune’s Center for Rheumatic Diseases and Honorary Chief Clinical Coordinator of ‘Ministry of AYUSH-CSIR Collaboration’, said that the test was conducted at three centers. It includes KGMU, Lucknow; DMIMS, Wardha and BMC Kovid Center, Mumbai were involved and each center consisted of 70 participants. Dr. Chopra stated that AYUSH 64 showed significant improvement as an adjunct to Standard of Care. And thus the duration of hospitalization was also observed when taken with SOC as compared to SOC alone. He also shared that many important, beneficial effects of AYUSH 64 on general health, fatigue, anxiety, stress, hunger, general happiness and sleep were also seen. In conclusion, Dr. Chopra stated that such a ‘controlled drug trial study’ provided clear evidence that AYUSH 64 is effective and safe as an adjunct to standard therapy in treating mild to moderate cases of Kovid-19. Can be used as a medicine. He also said that patients who are taking AYUSH 64 will still need to be monitored to identify the need for more intensive treatment along with oxygen and other treatment measures during hospitalization if the disease is worsening. Can be done.

AYUSH National Research Professor and Chairman of Inter-disciplinary Ayush Research and Development Task Force on COVID-19 on Kovid-19, Dr. Bhushan Patwardhan said that the results of this study on AYUSH 64 They are very encouraging and needy patients should get the benefit of Ayush 64 in this difficult time of disaster. He also underlined that the Ayush-CSIR Joint Monitoring Committee had monitored this multi-central trial. Dr. VM Katoch, former Secretary, Department of Health Research and former Director General of ICMR, is the Chairman of this committee. He also said that these clinical studies on AYUSH 64 were periodically reviewed by an independent body ‘Data and Safety Management Board’ (DSMB).

Confirming the claim of Dr. Patwardhan, Chairman of AYUSH-CSIR Joint Monitoring Committee, Dr. VM Katoch said that the committee has reviewed the results of the study of AYUSH 64 in depth. He recommended the use of Kovid-19 for the management of symptomatic infections, mild and moderate infections. It is also to be noted that this Monitoring Committee has recommended to the Ministry of AYUSH that the State Licensing Officers / Regulators conform to this new use of AYUSH 64 (Repurposing) to make it light and medium level Kovid-19. Inform them as useful in the management of infection.

Director General of Central Ayurvedic Research Institute (CCRAS), Dr. N. Srikanth elaborated that the Post Graduate Institute of Medical Education and Research, Chandigarh, including CSIR-IIIM, DBT-THSTI, ICMR-NIN, AIIMS Jodhpur and Medical Colleges; King George’s Medical University, Lucknow; Government Medical College, Nagpur; Studies are on in AYUSH 64 at prestigious institutions like Datta Meghe Institute of Medical Sciences, Nagpur. The results so far have clearly demonstrated its role in dealing with mild and moderate Covid-19 infections. They also reported that the results of seven clinical studies showed that the use of AYUSH 64 indicated early clinical recovery and avoidance of severe illness.