Home
Nation
Big deal between India and USA, Ind will be able to use US data for missile attack

Big deal between India and USA, Ind will be able to use US data for missile attack 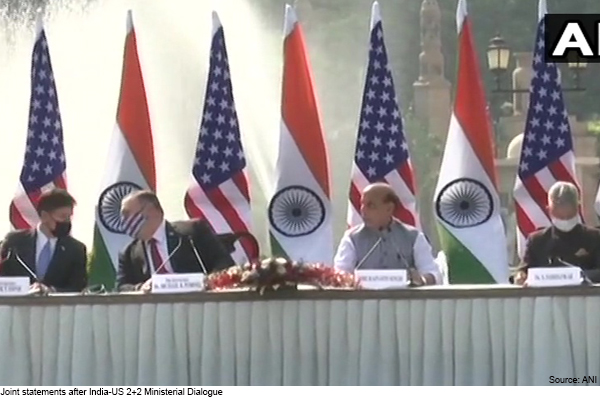 New Delhi: Amid the ongoing dispute with China over the Ladakh border, India and the US today signed a major agreement on military cooperation. In the 2 + 2 meeting issued at Hyderabad House, the Indo-US Basic Exchange and Cooperation Agreement ie. But the agreement has been completed. The agreement was signed by US Secretary of State Mike Pompeo, Defense Minister Mark Asper and on behalf of India, Defense Minister Rajnath Singh, Foreign Minister S Jaishankar. With this deal, India will be able to use special US data for missile attack. It has the exact geographical location of any locality. These agreements will strengthen India’s military strength even more.

After the deal, US Secretary of State Mike Pompeo said, “Today is a golden opportunity for 2 great democracies like us to come to pass.” As I said during last year’s visit to India, a new era of ambition is beginning in our relationship. I think we have done it in the last one year. There is still a lot of work to do. “

In the Indo-US 2 + 2 meeting, he said, “Cooperation in defeating the epidemic that occurred in Wuhan to promote peace, stability across the region, from facing the threats of the Chinese Communist Party in Wuhan to security and freedom.” We have a lot to do to discuss this till date. ”

Speaking on this occasion, Foreign Minister S Jaishankar, who was involved in this 2 + 2 ministerial dialogue from India, said, “At a time when it is particularly important to maintain a rules-based international order, defense and foreign policy of India and America. There is a large resonance in the ability to work closely. When we talk of regional and global challenges, we can make a real difference. “

S. Jaishankar said, “In the last two decades, our bilateral relations have steadily increased in their substance, aspects and importance. Today’s comfortable levels enable us to engage more deeply in matters of national security.”