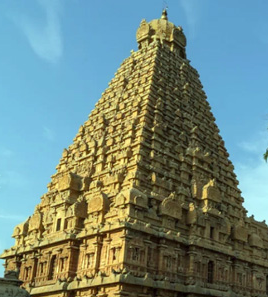 Located in Thanjavur city of Tamil Nadu is the famous Brihadeeswarar Temple of Lord Shiva. The 1000-year-old Brihadeshwara Temple has been declared a World Heritage Site in the UNESCO World Heritage Site list. This is the first and only temple in the world which is made entirely of granite stones. Brihadeeswarar Temple is also known as Brihadeeswarar Temple and Rajarajeshwara Temple. Brihadeshwara Temple, one of the largest temples in India, was built by the Chola emperor Rajaraja Chola I on receiving divine inspiration in a dream. The temple was built between 1003-1010 AD. This temple is 13 storeys high and its height is 66 meters. This temple is built on a 16 feet high concrete platform. According to the inscriptions in the temple, the chief architect of the temple was Kunjar Mallan Rajaraja Perunthachan, whose family members still do the work of Vastushastra, architecture.

The main temple and the gopuram date from the beginning of the construction i.e. 11th century. Since then the temple has been rebuilt, renovated and repaired several times. The temple was damaged due to war and invasion and sabotage by the Mughal rulers. Later, when the Hindu kings again conquered this area, they got this temple repaired and some other construction works also done. Later kings repainted the old paintings on the walls of the temple and beautified it.

The temple of Lord Kartikeya (Murugan Swamy), the temple of Goddess Parvati (Amman) and the idol of Nandi were built by the Nayak kings in the 16-17th century. Many inscriptions in Sanskrit language and Tamil language are also engraved in the temple.

Brihadeshwara Temple is a wonderful piece of architecture. The temple is built in such a way that the shadow of the dome does not fall on the ground. The stone Kumbam on its summit weighs 80 tons, which is made by cutting a single stone. How the stone weighing 80 tonnes was carried to the summit of the temple remains a mystery till date. It is believed that a 1.6 kilometer long ramp was built, on which it was moved inch by inch by moving it to the top of the temple.

130,000 tonnes of stone has been used to build this temple. It took only a record 7 years to build such a huge temple. After all, how many people were employed in this work and how was the technology in that era that the construction was done in such a short time which is not possible even today. This does not mean that there was any deficiency or mistake in the construction of the temple. This wonderful temple has faced 6 major earthquakes, but it did not suffer any kind of damage.

The huge idol of Nandi installed in the gopuram inside the temple is also a unique wonder. This idol of Nandi is 16 feet long, 8.5 feet wide and 13 feet high and weighs 20,000 kg. The special thing is that the idol has been carved out of a single stone. This is the second largest statue of Nandi in India.

Most of the Brihadisvara temple is made of hard granite stone and the rest part is made of sandstone rocks. The nearest source of granite stone is located at a distance of 60 km from the temple.

After all, how the stones of such a large quantity and such a huge size were brought from such a long distance to the site of the temple construction, no one has the answer. There is also no mountain around the temple, from which there is a possibility of taking stones.

Granite rocks are so hard that special diamond-pieced tools have to be used to cut them. In that period, without modern tools, how fine, artistic sculptures would have been made by carving the rocks in the temple, it remains a matter of wonder till date.

Interesting facts about the temple