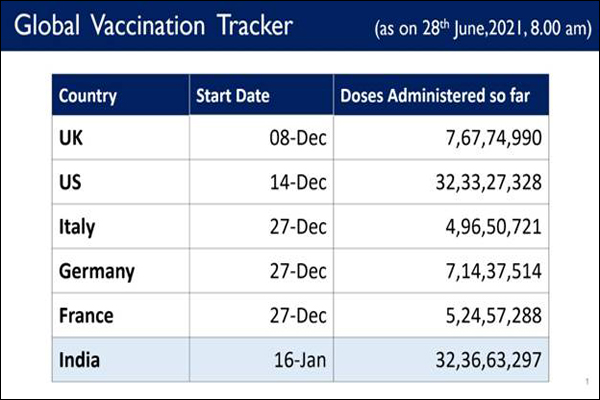 The total vaccination coverage in India crossed 32.36 crores yesterday. According to the provisional report received till 7 am today, a total of 32,36,63,297 doses of vaccine were administered through 43,21,898 sessions. A total of 17,21,268 doses were administered during the last 24 hours.

A new chapter in the universal accessibility of COVID-19 vaccination began on June 21, 2021. The Central Government is committed to increase the coverage of Kovid-19 vaccination across the country and speed up the process.

For the twenty-first day, less than one lakh cases are coming on a daily basis. This is the result of concerted efforts of the Center and the States/UTs.

A total drop of 13,409 has been observed during the last 24 hours and active cases constitute only 1.89 per cent of the total positive cases in the country.

About twelve thousand (12,430) people have recovered during the last 24 hours as compared to new cases coming daily.

Of the people infected since the beginning of the pandemic, 2,94,09,607 people have already recovered from COVID-19, and 58,578 patients have recovered in the last 24 hours. The recovery rate from this quote is 96.80 percent, in which the trend of increasing continues.

The testing capacity in the country is continuously being increased, in connection with which a total of 15,70,515 tests were conducted during the last 24 hours in the country. Basically, India has conducted more than 40.63 crore (40,63,71,279) tests so far.