Cover-19: Number of active cases in India decreased to 3.62 percent 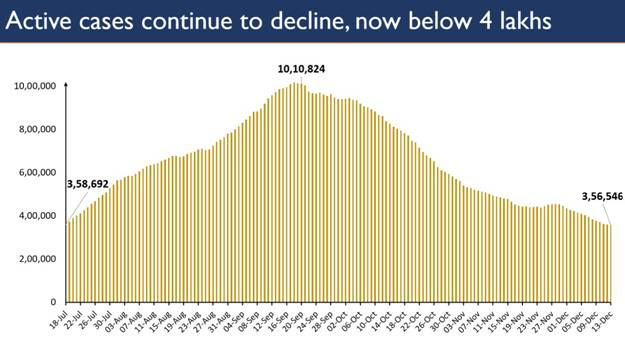 The country has recorded the lowest number of cases per million population in the world (158) in the last seven days, much lower than many other countries in the Western Hemisphere.

75.23 percent of newly recovered patients are from ten states / UTs.

The highest number of cured patients in a single day in Kerala is 5,268. The number of new patients cured in Maharashtra is 3,949 and in Delhi 3,191.

The contribution of new cases from ten states / union territories has been 75.71 percent.

The death of 391 patients has been recorded in the last 24 hours. 77.78 percent of the new cases of death are from ten states / UTs. 80 patients died in Maharashtra with 79.28 percent. 47 and 44 deaths have been recorded in Delhi and West Bengal respectively.

In terms of comparison internationally, India has recorded the lowest level of new death cases in the last seven days (2) per million population.