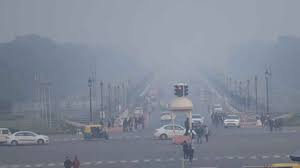 Delhi and adjoining areas will fall by 3-4 degrees in the coming week due to the western disturbance that struck the plains of northern India. From tomorrow onwards, temperatures will start falling due to the impact of western disturbances. The AQI was 435 at 4 pm in New Delhi but it is improving after the rain started at 5 pm today.

There are chances of snowfall in Jammu and Kashmir. The temperatures will not fall to December levels but there will be a decrease of 3-4 degrees in the coming days,” Western disturbances affects the plains of Punjab, Delhi, Western Uttar Pradesh, Haryana mainly.

Parts of Delhi witnessed a spell of rain earlier today as the temperature recorded at 6 pm in the national capital was 22.6 degrees celsius.According to the India Meteorological Department (IMD), the Relative Humidity recorded at 5.30 PM was 89 per cent.

Shallow fog is forecast for the coming week with temperatures ranging from 11 to 28 degrees celsius in the national capital.

A day after Diwali, the Air Quality Index (AQI) recorded in the national capital was 435 which is in the severe category, the Central Pollution Control Board said on Sunday.