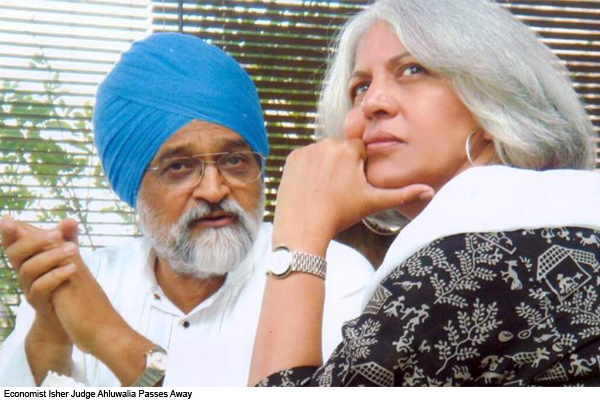 New Delhi: Famous economist Isher Judge Ahluwalia died on Saturday. She was 74 years old. She was the chairperson of an Indian think-tank for research on international economic relations for more than 15 years. She died today after fighting brain cancer for 10 months. Isher was the wife of former Deputy Chairman of the Planning Commission Montek Singh Ahluwalia.

Isher Ahluwalia, who did a Master of Arts (MA) from Delhi School of Economics and a PhD from Massachusetts Institute of Technology (MIT). Isher was awarded the Padma Bhushan in 2009 for his services in the field of education and literature.

At ICRIER, Ahluwalia’s research focused on urbanization and challenges arising in India. She was also the author of several books, including Transforming Our Cities: Postcard of Change and, more recently, a memoir titled Breaking Through.

Research by Isher Judge Ahluwalia has mbeen focusing on issues of urban development, industrial development, macro-economic reforms and social sector development in India. She was a notable participant in many policy debates and wrote various articles. Isher Judge Ahluwalia also resigned as chairman of the Indian Council for Research on International Economic Relations (ICRE) in August due to declining health. He was elected chairperson of the annual general meeting on August 8, 2005.