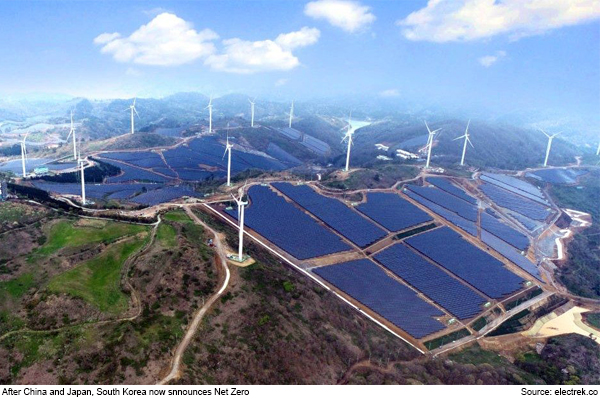 New Delhi: This is the first time that the Korean government has officially pledged to become carbon neutral by 2050. Earlier, the ruling Democratic Party included it in its general election platform last April and the governors reached a resolution for it last week, but it all failed to develop into a policy.

Japan’s new Prime Minister, Yoshihida Suga, in his speech at the inaugural session of the Parliament in his inaugural session of Japan, in a welcome move recently, in a speech at the inaugural session of Japan, the new Prime Minister of Japan, the world’s third-largest economy and fifth largest emitter of carbon dioxide. Aimed at 2050 to achieve. This decision of Japan can not only have far-reaching effects on the economy domestically, but will also have an impact on other countries’ relations with Japan. Especially countries like Australia and Indonesia will feel the most impact of this decision as both these countries are Japan’s largest coal exporters.
On the other hand, Japan has an offshore power generation capacity of 1120 GW which will prove to be very attractive for European countries.

The announcement comes after Korea’s growing criticism over the country’s lack of climate action, particularly because it is one of the world’s three largest coal financiers. Furthermore, it follows changes away from coal by domestic institutions. Last month, KB Financial Group, Samsung C&T and KEPCO, all announced the emergence of thermal coal.

Reacting to this latest Korean initiative, Rebecca Mikula-Wright, executive director of Asia Investor Group in Clement Change (Asia Investors Group in Climate Change) (AIGCC), said, “Those investors welcomed this formal confirmation from President Moon. Will be done by those who increasingly seek to channel private capital into markets that are mitigating climate risk and increasing opportunities for clean technology deployment. And a large number of institutional investors also support the Paris Agreement targets and achieve net zero emissions by 2050. ” He continued, “The three largest economies in East Asia now have clear commitments for net zero emissions in or around mid-century. This is a powerful market signal that will help encourage other Asian countries to follow. “

And on this Korean initiative from Youth4ClimateAction, 16-year-old activist Do-hyun Kim says, “We welcome her Net Zero pledge, but hope it won’t be just” empty words “. We feel that being carbon neutral by 2050 cannot be achieved overnight, so whatever they said today they should be responsible and act with concrete plans. ”

Talking about Japan once again, the Prime Minister said in his speech that his goal is to make Japan a carbon-free society by 2050 which will reduce GHG (GHG) emissions to zero overall.
Reacting to the Japanese Prime Minister, Co-founder and CEO of Climate Real Impact Solutions, and JERA Director David Crane said, “Congratulations to Prime Minister Suga for his zero carbon pledge.” His bold leadership on behalf of Japan will inspire other nations and serve as a catalyst to bring the technical expertise and manufacturing power of Japanese industry to the fight against global warming. “

On this issue further, Kahori Miyake, Co-President, Japan Climate Leadership Partnership (JCLP), Executive Officer, CSR and Communications, AEON stated, “Three years ago, in Bonn, Germany, where the 2017 United Nations Climate Change Conference (COP23) Was held, I realized that Japan was behind other countries and is going in the opposite direction. Today’s announcement will give Japan a chance to change the situation. “
And Toshihiro Kawakami, co-chairman, Japan Climate Leaders Partnership (JCLP), head, Department of Environmental Management, Lixil Corporation, said, “This announcement marks a change for a decarbonized society.”

After the decision of these big economies of Asia to be net zero, now eyes are on India, when will India announce its net zero level.