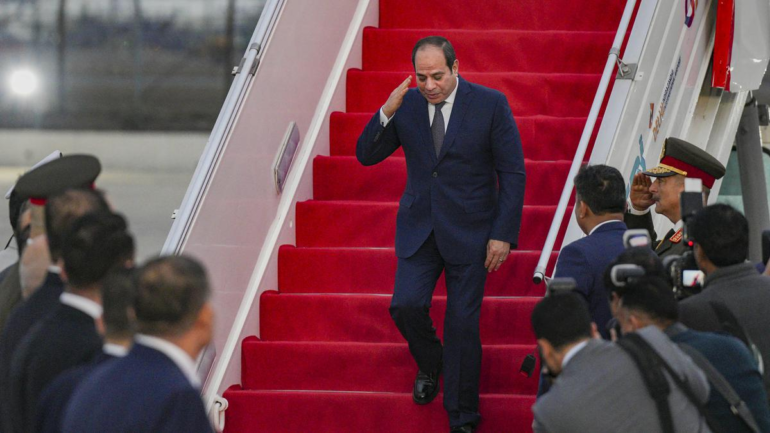 New Delhi: Egyptian President Abdel Fattah el-Sisi arrived on Tuesday on a three-day state visit focused on boosting bilateral ties in several areas including agriculture, digital domain and trade. Prime Minister Narendra Modi and Sisi will hold wide-ranging talks on Wednesday (January 25). People with knowledge of the matter said that after the talks, the two sides are expected to have half a dozen agreements to strengthen ties in many areas. The 68-year-old influential Arab leader will grace the Republic Day celebrations on January 26.

Sisi will be accompanied by a high-level delegation comprising five ministers and senior officials. The President of Egypt visited India in October 2015 to attend the 3rd India-Africa Forum Summit, followed by a State visit in September 2016.

Sisi will be accorded a ceremonial welcome at the Rashtrapati Bhavan on Wednesday ahead of his talks with Modi. External Affairs Minister S Jaishankar will also call on CC. “The upcoming visit of President Sisi is expected to further strengthen and deepen the time-tested partnership between India and Egypt,” the Ministry of External Affairs (MEA) said in a statement on Saturday.

India is keen to further expand ties with Egypt, which is a major player in the politics of both the Arab world as well as Africa. It is also seen as a major gateway to markets in Africa and Europe. The Ministry of External Affairs said the multifaceted relationship between the two countries is based on shared cultural values, commitment to promoting economic development, cooperation in the field of defense and security, and convergence on regional and global issues.

Bilateral trade between the two sides has picked up in the last few years. According to the Ministry of External Affairs, bilateral trade between India and Egypt achieved a “record high” of USD 7.26 billion in 2021-22. More than 50 Indian companies have invested about US$ 3.15 billion in various sectors of the Egyptian economy including chemicals, energy, textiles, apparel, agri-business and retail.