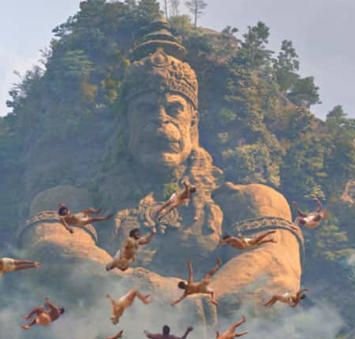 New Delhi: The teaser of filmmaker Prashant Verma’s superhero film Hanuman was recently launched and it has once again created a buzz on social media. Fans are comparing it to Om Raut’s big budget Adipurush starring Prabhas, Saif Ali Khan and Kriti Sanon. The Hanuman teaser is loaded with heavy VFX and looks like an interesting watch.

“Hanu-Mana is not just a Telugu film. It should be a film not only in whole India but in whole world. He is the biggest superhero. He is more powerful than superman and batman. We have many Marvel and DC superhero universe . I have loved mythology since childhood. My previous films also have mythological references. For the first time I am doing a film on the mythological character Hanu-Mana. This is the first of many films to come.” the filmmaker as saying.

Fans took to social media and praised the Hanuman teaser against the Adipurush first look teaser, which irked fans for the poor quality VFX and character representation.

Primeshow Entertainment’s K Niranjan Reddy is producing the film which will star Amrutha Iyer in the lead role. The makers released the teaser of the film on Monday. This is Prashant Verma’s second film with lead actor Teja Sajja. They previously worked together in ‘Zombie Reddy’.

Amrutha Iyer, Varalakshmi Sarathkumar, Getup Srinu and Vinay Rai are other prominent actors who have worked hard for the film.