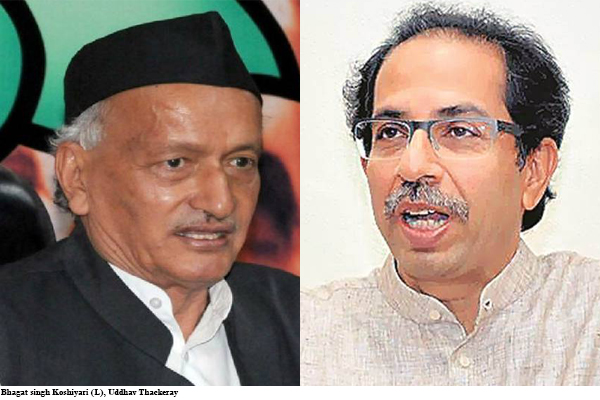 Mumbai: A political turmoil has broken out in Maharashtra due to non-opening of temples. The BJP workers have requested Governor Bhagat Singh Koshiyari to open the temples in the State. Koshiyari, taking immediate notice of the matter, wrote to CM Uddhav Thackeray and asked him to open the closed temples.

To this, Maharashtra CM Uddhav Thackeray replied that as it was not proper to impose a sudden lockdown, it is also not right to end it completely. On the other hand, Shiv Sena MP Sanjay Raut has also targeted the Governor.

Earlier, Maharashtra Governor Bhagat Singh Koshiyari wrote a letter to CM Uddhav Thackeray requesting to open temples closed due to Corona in the state. The governor taunted whether Uddhav received any warning from God to stop the reopening of the shrines or whether he had become secular.

Koshyari wrote in the letter, “You have been a strong advocate of Hindutva. After becoming Chief Minister, you made public your dedication to Shri Ram by going to Ayodhya. You went to the Vitthal Rukmini temple in Pandharpur on Ashadhi Ekadashi and worshiped. But I wonder if you have to postpone the opening of the shrines … Have you received any such dev order, or have you suddenly become ‘secular’, a word you hated? “

Responding to the Governor, Maharashtra CM Uddhav Thackeray said that it was not right to implement the sudden lockdown. It would also not be a good thing to completely cancel it all at once. Uddhav hit back at the governor for calling himself secular and said, “Yes, I follow Hindutva, my Hindutva does not require verification from you.”

On the question of Governor Bhagat Singh Koshiyari, Shiv Sena leader and MP Sanjay Raut said that the Maharashtra government is serious in keeping with the real meaning of the word secularism, as stated in the constitution. The government is taking the decision keeping in mind the situation in Corona. As such, the Governor’s letter proves that he is not ready to follow the Constitution of India.

Governor Koshiyari further wrote in the letter that unfortunately even after four months of that famous announcement, you have once again increased the ban on places of worship. It is ironic that on one side the government has opened bars, restaurants and beaches, while on the other hand the gods have been forced to remain in lockdown.