Home
My Voice
Here’s how Hanuman ji was born, his mother was a cursed Apsara

Here’s how Hanuman ji was born, his mother was a cursed Apsara 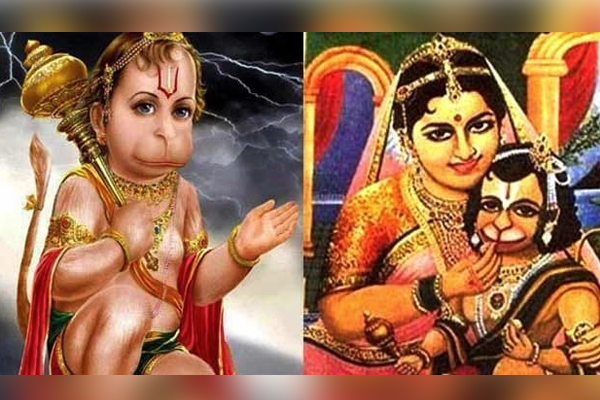 Once due to his fickle nature, he disturbed the penance of a bright sage. As soon as the penance was dissolved, the sage cursed her that she would become a monkey in the next life. Then the consciousness of Punjikasthala was broken. He apologized to the sage and asked him to take back his curse. On repeated prayers, the sage felt pity on him.

The sage said – O girl, curses can never be taken back, but with this I give you a boon that your monkey form will also be unique and you will give birth to the most powerful son. Lord Shiva will grow in your womb. Thus Punjikasthala was blessed to be the mother of a mighty and divine son.

Here, when Indradev saw Punjiksthala sad, he asked the reason for it. Punjikasthala told everything to Lord Indra. Indra told her that to get rid of this curse, she should take birth on earth and meet her husband there. As soon as she gives birth to the incarnation of Shiva, she will get rid of the curse.

Thereafter, Punjikasthala took birth on earth by the name of Anjani. One day Anjani was hunting in the forest, when she came across a mighty and divine youth who was unarmed fighting a lion.

Anjani got fascinated by the bravery of that young man. But as soon as that young man looked at Anjani, his face also became like a monkey. Seeing this, Anjani started crying loudly. Then the said monkey said that I am none other than the monkey king Kesari. After this Kesari and Anjani got married.

Even after a long time of marriage, when Anjani could not become a mother, she met Matang Rishi, worried. After listening to all the words of Anjani, the sage said that Anjani should go to Swami Tirtha near Narayan Parvat and do hard penance, only then she will get a son-gem. Lived only on air for 12 years. Then the wind god gave a boon to Anjani and said that from your womb a great son will be born who is as bright as the sun and fire and who knows the Vedas and Vedas. But now you have to do severe penance at Lord Shiva’s place. After this she got engrossed in the severe penance of Lord Shiva.

Finally, when Lord Shiva was pleased with Anjani’s penance and asked her to ask for a boon, Anjani told him how she would have to give birth to an incarnation of Shiva to get rid of the sage’s curse. Saying Amen, Shiv ji disappeared.

At the same time, King Dasaratha of Ayodhya along with his three wives Kaushalya, Kaikeyi and Sumitra were performing son Kameshti Yagya from Shringi Rishi to get son-gem. On the completion of the Yagya, Agnidev himself appeared and gave Shringi Rishi a pot (bowl) of kheer in a golden vessel and said – Rishi, feed this kheer to the three queens, their wishes will definitely be fulfilled.

But then a bird snatched a part of the kheer and flew away. That kheer fell into the hands of Anjani, who was performing severe penance. Anjani ate it considering it as God’s prasad. Anjani Mata became pregnant after eating the Prasad. Finally, Hanuman ji was born from the womb of Anjani Mata.