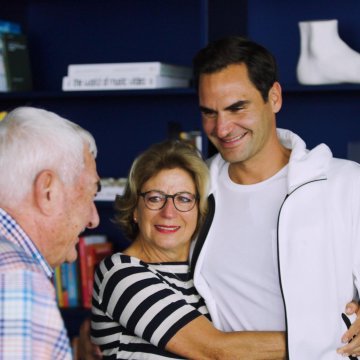 Roger Federer’s parents and wife have played important roles throughout the Swiss maestro’s career. So, when it came time to say goodbye to his illustrious career, the 20-time Grand Slam singles champion announced his upcoming retirement in the presence of wife Mirka and parents Robert and Lynette.

It was beautiful to release the news surrounded by my Mum and Dad and Mirka. Who would have thought that the journey would last this long. Just incredible! pic.twitter.com/0rRAMRSaRu

Federer has confirmed that next week’s Laver Cup in London will be his last ATP tournament. After announcing his imminent retirement, the Swiss legend said: “It was great to release the news surrounded by my mom and dad and Mirka. Who would have thought the journey would last so long. Just unbelievable!”

The Swiss giant held the world number one position for 237 consecutive weeks from February 2, 2004 to August 18, 2008. Federer was instrumental in securing a significant increase in prize money for the players. During the 2009 French Open, he achieved a career Grand Slam and a month later, at Wimbledon, he broke Pete Sampras’ all-time men’s singles record by winning his 15th major title.

During his ATP tour, Federer scored 1251 victories, the second highest after Jimmy Connors (1274). Federer also won 103 Tour-level trophies, only behind Connors (109). It should be noted that Federer never retired from a match and on February 19, 2018 at the age of 36, became the oldest number one player in the world in the history of ATP rankings.

“As many of you know, the last three years have given me challenges in the form of injuries and surgeries. I have worked hard to return to full competitive form, but I am not aware of my body’s capabilities and limitations. And I know the message of that too. It’s become clear lately,” Federer said in his retirement post.

“I’m 41. I’ve played over 1,500 matches in 24 years. Tennis has treated me more generously than ever before and I must recognize when it’s time to end my competitive career. Next London will be my last ATP event in the Laver Cup of the week. I will play more tennis in the future, certainly, but not on the Grand Slam or the Tour.”