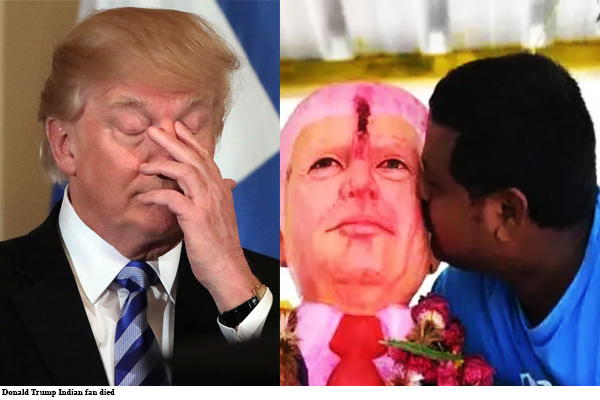 New Delhi: Where there is no discussion of the madness of Indians, but in the case of madness, it is towards the Indian leader, Bollywood actor, cricketer or any player. But the man from a small village in Hyderabad was crazy about US President Donald Trump. Let me tell you that Krishna was a great fan of Trump. He had also built a 6 feet tall statue of Trump, which he used to worship and milk every day, after spending 2 lakh rupees in his house. Krishna had been fasting for his recovery since Trump became ill. According to Navbharat, this Indian fan Busa Krishna Raju of Trump died of a heart attack. In fact, Krishna was troubled by the news of Trump getting corona infected and he kept fast for his beloved leader to recover soon.

Krishna’s family said that he kept fast and offered prayers as soon as he got the news of Trump’s Corona positive. Due to this concern, he could not even sleep properly. He died on Sunday night due to cardiac arrest.

Trump’s temple was built at home
Telangana farmer Busa Krishna was a big fan of US President Donald Trump. His craze for trumps is evident from the fact that he installed a 6-feet tall statue of Trump in his house. Krishna’s house is located in the district of Jangaon, 120 km from Hyderabad.

Used to worship Trump every day
Krishna worshiped the trump daily, anointed him with milk and even touched the feet of the idol. The idol is installed here under a tin shed. Busa Krishna, a Telangana farmer, had not only installed the statue of Donald Trump, but had also put his picture in his special things. Krishna had installed Donald Trump’s back cover on his mobile.

The idol was built after spending 2 lakhs
Krishna made a 6-foot-tall statue of Trump on 14 June last year with the help of 20 people at his home. About 2 lakh rupees were spent on this idol. He had said that at first the people of the village made fun of him, but when he came to know that this is the only temple of US President Trump worldwide, then people started taking him seriously.