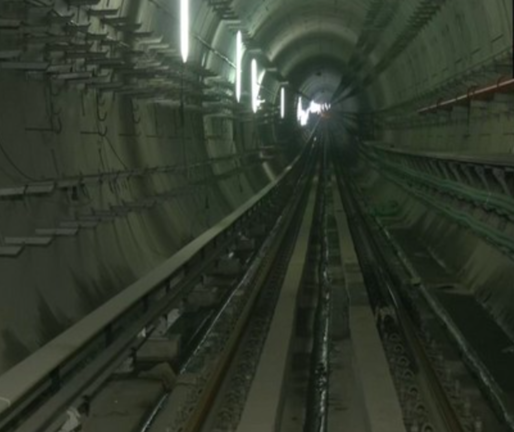 India’s first underwater tunnel is being built under the Hooghly River in West Bengal, as part of Kolkata’s East-West Metro corridor.

The East-West Metro corridor will connect the IT hub of Salt Lake Sector V in the east to Howrah Maidan in the west across the river in Kolkata.

India’s first underwater tunnel is almost complete and is likely to be commissioned in December 2023 after the completion of the 2.5 kilometer stretch between Esplanade and Sealdah on the East-West Metro Corridor.

The inner diameter of the tunnel will be 5.55 meters and the outer diameter will be 6.1 metres. The space between the up and down tunnels will be 161. meter center-to-center.

The inner walls of the tunnel are made of high-quality M50 grade reinforced concrete sections, each with a thickness of 275 mm. Six such structures are used to reinforce the inner layer of the tunnel diameter.

Special safety measures were also taken to prevent leakage in the tunnel and prevent river water from entering the structure. A highly safe concrete mix was used for the sections to minimize water ingress.

The sections were sealed using a sophisticated grouting process to fill the space between the tunnel boring machine sections and the shield.

Two 760 m emergency shafts have been installed in the tunnel for evacuation as per National Fire Protection Association (NFPA) guidelines.

Shailesh Kumar, general manager of the Kolkata Metro Rail Corporation, told The Times of India that the alignment was possible only underwater, given the densely populated residential areas and other technical issues.

The metro line connecting Howrah and Sealdah will reduce the travel time between the two points to 40 minutes from the 90 minutes currently taken by road. This will also reduce the jam of vehicles on both sides.

The East West Metro corridor of Kolkata Metro has faced several delays and cost overruns over the years. It was approved in 2009 at a cost of Rs 4,875 crore, with a completion date of 15 August; However, the official estimate of the project has gone up to Rs 8,475 crore, of which Rs 8,383 crore has already been spent, the report said.