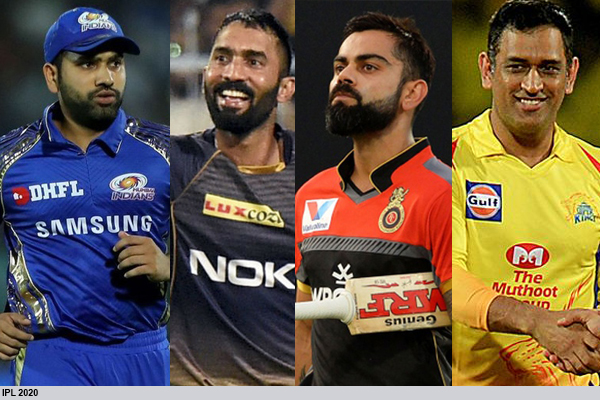 The Indian Premier League (IPL) auction was a great one and the franchise managed to surprise many with the selection of players. Australian paceman Cummins was the most expensive pick at the event with Kolkata Knight Riders for an outstanding sum of Rs 15.5 crore. Other foreign players who made big bucks at the auction were Glenn Maxwell, Sheldon Cottrell and Chris Morris.

The owners and management of all the teams appeared happy and satisfied with their choice after the auction. The 8 teams in the competition look equally balanced for the first time in so many years and we are all set to watch an exciting series of matches in the IPL 2020. This may prove to be the most exciting season after the corona virus has emerged. Although it is quite difficult to choose the right winner to win the trophy this season, but here we are trying to choose the top 4 teams that can reach the playoffs.

Mumbai Indians (MI)
Well, strangely, it should not be the season for Mumbai Indians (MI) on Aad and Even Basis. But with the strong players he has, it would be an untoward for the Rohit Sharma-led team if they remain in the bottom 4 in the points table next season. MI has a strong team and this team is a perfect blend of youth and experience.

Mumbai has a strong base of Indian players. Rohit Sharma, Hardik Pandya, Krunal Pandya, Suryakumar Yadav, Rahul Chahar and Ishan Kishan are almost certain to play in every match. And then comes foreign players, including Kirron Pollard, Quinton de Cock and Trent Boult. It retained explosives Chris Lynn and Michelle McClenaghan. MI play as a team and all give their best performance. If all goes well, no one will stop them from qualifying for the playoffs.

Kolkata Knight Riders (KKR)
This is a team that has spent a lot of money in the auction and is currently looking the strongest of all 8 teams on paper. He signed Pat Cummins, Eoin Morgan, Chris Green and Tom Banton at the auction. Rahul Tripathi was another good choice for the line-up. The batting line-up is capable of literally defeating any team in the IPL this year.

However anyone would argue that they lack good death bowlers. Mostly this team has been won by batsmen like Andre Russell, Morgan and Dinesh Karthik. KKR has a strong batting lineup with Banton, Shubman Gill and Tripathi followed by Nitish Rana and possibly Russell and Morgan on 4 and 5. Karthik can always come and play as per the situation.

In bowling, Cummins and Russell will always be the first choice and the franchise has Praveen Tambe, Sandeep Warrier, Kamlesh Nagerkoti and M Siddharth as backup. KKR looks to be a balanced side and the team should be able to make it to the top four.

Royal Challengers Bangalore (RCB)
As usual, this season is also expected to be the fourth place to make it to the playoffs. While Sunrisers Hyderabad (SRH), like CSK and MI, have been seen as a strong team, Royal Challengers Bangalore can beat them at the last moment. Bangalore have bought Dale Steyn and Isuru Udana to bolster their bowling attack at the auction. Uddana has made a tremendous increase in the last 12 months thanks to excellent bowling in the death overs. His batting is also an added advantage. And any team would welcome a man like Dale Steyn. If no player is injured in RCB, then this team can make a place in the play-offs.

RCB has picked up a talented player like Joshua Phillips, who replaces Parthiv Patel in this tournament. Phillip is a brilliant batsman who is currently doing well in the BBL for the Sydney Sixers. He also has Aaron Finch, Virat Kohli and AB de Villiers who are amazing batsmen.

His bowling has been strengthened by the inclusion of Chris Morris with a tremendous bowling attack by Washington Sundar, Chahal, Saini, Umesh Yadav and Kane Richardson. With this, the presence of Moin Ali and Devdutt Padikkal and the entire team seems fantastic. RCB have everything they need at the moment to make it to the playoffs.

Chennai Super Kings (CSK)
Many can argue about CSK that she will make it to the top 4 this year. But that’s right, they have a pile of experienced players in the line-up. The franchise has one of the best captains in the world, who specializes in its last-minute victory. MS Dhoni knows how to get the best from his players. IPL 2020 is likely to be his last season. This veteran cricketer holds the record for consistently leading his team to the playoffs.

As far as the auction is concerned, CSK has picked Sam Koran, Piyush Chawla, Josh Hazlewood and R Sai Kishore. Although many are eyeing the inclusion of Hazlewood, who last played in the T20s in 2016, the other three players will certainly play this season. It would not be surprising if these Yellows topped this season as well.