Home
Sports
Kapil Dev praised for Suryakumar, We had hard time to find contenders like him last 1-2 years

Kapil Dev praised for Suryakumar, We had hard time to find contenders like him last 1-2 years 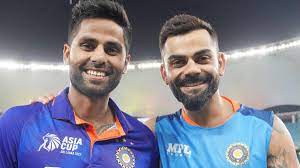 “Suryakumar Yadav has really used his opportunities well in this team. To score runs so fast he should get more praise. India would still like their captain Rohit Sharma to be a bit more compact and Rahul to score some runs. Virat Kohli should play anchor because he can speed up but if he gets a chance to play the full 20 overs this team can chase any total the last 1-2 years he was the player we were struggling to find who is he going to bat for us in No. 4? There were players, but not the kind of contenders we’ve found in Suryakumar,” Kapil said.

India got off to a cautious start before Rohit Sharma opted to strike the first blow. Kohli and Suryakumar added a 95-run unbeaten partnership as India eliminated 112 runs in the last 10 overs. On the ball, India gave away three wide and a no-ball (thrown in by Arshdeep Singh), and while not criminal in nature by any stretch of the imagination, Kapil feels he could have been controlled, especially when the opponent is the Netherlands.

India have surged to the top of the points table in Group 2 with a solid 56-run win over the Netherlands in their Super 12 T20 World Cup match in Sydney. With wins over Pakistan and now the Netherlands, India are the only undefeated team in the tournament, and are just one more win away from really cementing their semi-final chances. Against the Netherlands on Thursday, India put on a clinical show, with half a century from Rohit Sharma, Virat Kohli and Suryakumar Yadav scoring half a century and the bowlers racing through the Dutch batting line-up.

Despite the victory, however, former India captain Kapil Dev issued an alarming warning to Rohit and Co. ahead of their next match against South Africa in Perth on Sunday. Kapil reckons India needs to address a couple of issues before it’s too late, and while there has been a lot of improvement in their bowling under fire department, a few more boxes need to be ticked if India is to go all the way.

“Bowling has improved. In batting, I felt India could have scored more runs, but in the last 10 overs, they made up for it by scoring over 100 runs. See, the wickets are big and so the spinners win a little “. of advantage. I would still say that in patches we are still lacking bowling,” Kapil said.

“Against a team like the Netherlands, you need to have proper planning on where to bowl in terms of line and length. The most important thing is that in such matches, there should be no balls without balls or widths because you are practicing and you need to win the match. too. So overall I’d say the bowling was good, but there were still some gaps.”