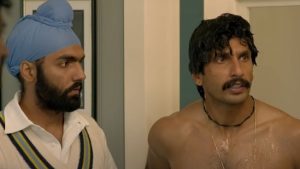 Everyone from filmmakers Karan Johar and Nikkhil Advani to actors R Madhavan and Dia Mirza has praised the trailer of sports drama, 83, in which Ranveer Singh plays Kapil Dev.

The trailer of Ranveer Singh-starrer sports drama 83 is finally out and it has impressed the audience as well as the people of the film industry. Dia Mirza and R Madhavan said that watching the trailer gave them goosebumps, while Karan Johar called it a ‘real blockbuster’.

On June 25, 1983, India won their first Cricket World Cup title by defeating West Indies in the final at Lord’s Cricket Ground. The film is about a historic victory.

83 will release in theaters on December 24.

R Madhavan appreciated the trailer and also praised Ranveer and Jeeva. He wrote on Twitter, “This is a big blockbuster – my brothers @RanveerOfficial and @JiivaOfficial are bloody geniuses. FantasticCC.”

Karan Johar tweeted, “Humble congratulations to the entire cast and crew!!! This gave me goosebumps and this is so emotional and stimulating! Bonafide blockbuster! Kabir!!! You are the man and Ranveer you are just a veteran’s.” He became Kapil Dev effortlessly! Badhaai Ho (Congratulations)!”

Dia Mirza said that she got goosebumps when she reacted to the trailer on Twitter. Neil Nitin Mukesh was also impressed. He tweeted, “Simply excellent!!! What a great trailer. Goosebumps all the way. Congratulations to @kabirkhankk @RanveerOfficial. @deepikapadukone and the entire team.”

Filmmaker Nikkhil Advani also praised the trailer of 83. He wrote, “#KapilDev in such good form @kabirkhankk brought tears to my eyes. This one is special too. #thisis83 #JeetegaBhaiJeetegaIndiaJeetega.”