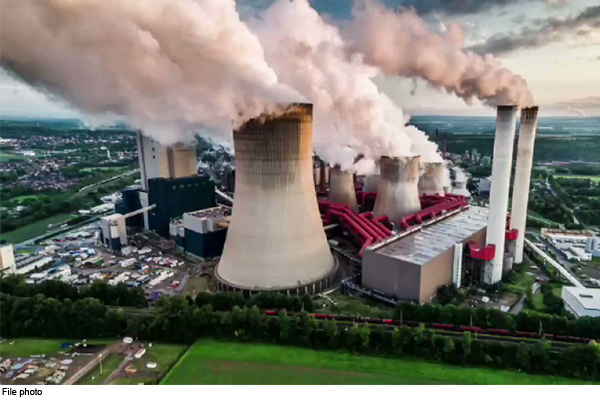 According to the report released today by the World Meteorological Organization (WMO), the industrial slowdown caused by the Kovid-19 epidemic has not kept greenhouse gases at record levels. These gases, which are increasing the heat in the atmosphere, are responsible for the operation of more extreme weather, melting of ice, rising sea levels and ocean acidification.

The lockdown reduced emissions of many pollutants such as carbon dioxide, but had no effect on CO2 concentrations. According to the WMO Greenhouse Gas Bulletin, the level of carbon dioxide continued to rise in 2019, an increase that continues in 2020.

In 2019, CO2 growth exceeded the annual global average of 410 degrees per million. Since 1990, total radiative forcing has increased by 45%.

In his response, WMO Secretary General Professor Pettri Talas said, “Carbon dioxide settles in the atmosphere and ocean for centuries. The last time the Earth experienced a comparable concentration of CO2 was 3-5 million years ago, when temperatures were 2-3 degrees Celsius warmer and sea levels were 10–20 meters higher than now. But there were no 7.7 billion people on earth then. “

He adds, “We violated the global limit of 400 degrees per million in 2015. And just four years later, we surpassed 410 ppm (ppm). Such a growth rate has never been seen in the history of our records. The drop in emissions from the lockdown was just a small glare. We have to maintain it. “

There is no solution to the environment or climate from the effects of the Kovid-19 epidemic. But yes, it does provide a complete overview of our industrial, energy and transportation systems and a platform for an ambitious climate action.

Professor Pettri Talas further adds, “Many countries and companies have committed themselves to carbon neutrality and this is a welcome step. There is no time to lose now anyway. “

The Global Carbon Project estimated that during the most intense period of shutdown, worldwide CO2 emissions decreased by up to 17% because of population imprisonment. Because the duration and severity of the lockdown are unclear, predictions of total annual emission reductions in 2020 are very uncertain.

This recent report is based on observations and measurements from the Global Atmosphere Watch and Partner Network, including atmospheric monitoring stations in remote polar (polar) regions, high mountains and tropical (tropical) islands.
Now talk about these gases separately. First of all, carbon dioxide is the single most important long-lived greenhouse gas in the atmosphere related to human activities, responsible for two-thirds of radiative forcing.

Another important gas is methane, which has been in the atmosphere for nearly a decade. Methane contributes about 16% of the radiative forcing by long-lived greenhouse gases. About 40% of methane is emitted into the atmosphere by natural sources (eg, wetlands and termites), and about 60% comes from anthropogenic sources (eg, ruminants, rice agriculture, exploitation of fossil fuels, landfills and biomass burning). Now talking about nitrous oxide, it is both a greenhouse gas and ozone depleting chemical.

There is currently no decrease in the concentrations of all these gases, and finally from this complete report we find that all is not as good as it appears. There is much to do to stop climate change.